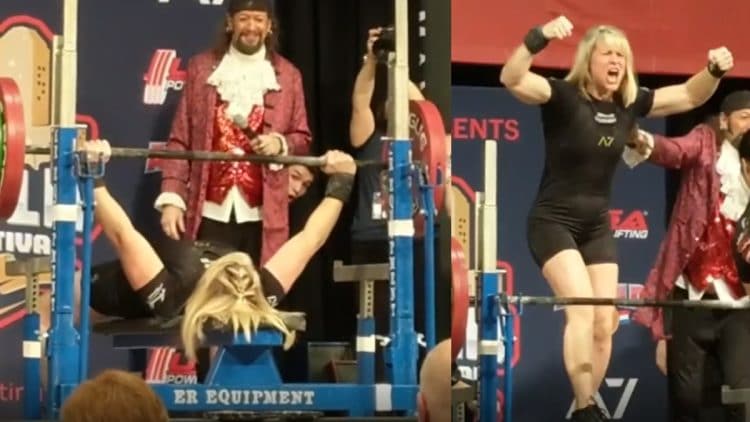 Jen Thompson is one of the all-time greats in the sport of powerlifting. She is a woman of many talents and is widely recognized, mostly for her power in the bench press. Jen displayed her prowess at the 2022 USAPL Arnold A7 Pro Bench Bash. The powerlifting event was featured at the 2022 Arnold Sports Festival, which took place May 5th, in Columbus, Ohio. Jen claimed the win with a 320.7 lbs (145.5 kg) raw bench press, which is a new USAPL World Record in the 67.5 kg weight class.

Jen Thompson’s bodyweight at the time of the lift was 144.1 lbs (65.3 kg), and it translated to a DOTS score of 153.097. In addition, this means that Jen bench pressed 2.2x her bodyweight. The lift was also raw, as she only used a lifting belt and wrist wraps. This is Jen’s 22nd win at the Arnold Sports Festival powerlifting events. Jen states that this is her 77th World Record in the open and masters categories.

The competition consisted of only the bench press event, and all three of Jen’s attempts were successful.

At 48-years-old, Jen Thompson is still improving and setting new PRs. She has had a long and amazing career, which she hopes to continue as long as possible. Her first sanctioned competition was the 1999 USAPL National Bench Press Championships. Since then, she has taken part in over 110 competitions, and won most of them.

She has many incredible achievements, but Jen Thompson’s greatest success is becoming the 11x IPF World Classic Powerlifting Champion. She has also won the USAPL Nationals 50 times. Jen was officially recognized as one of the greatest powerlifters ever back in 2019 and was inducted into the IPF Hall Of Fame.

This is the 23rd year of Jen Thompson’s career, and she is still breaking records. Her career will definitely last for many more years, and hopefully hit new PRs alongside. It is unknown when she intends to compete again, but the chances are, we won’t have to wait too much.