NPC/IFBB Pro Judge and bodybuilder Jerry Ward has passed away at 46 peacefully in his sleep, leaving behind his beloved wife. 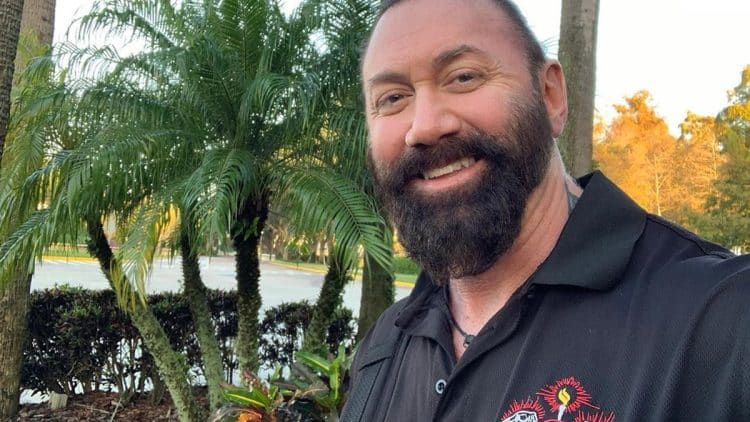 Popular bodybuilder and NPC/IFBB judge Jerry Ward has died at the age of 46. In a recent post made by bodybuilding promoter Gary Udit, Udit confirmed Ward died last night on Friday July 22, 2022, the cause of death has yet to be made official.

Ward has been vocal about his love for bodybuilding and will be remembered for years to come for his unparalleled knowledge of the sport. The bodybuilder leaves behind his beloved wife, Erin Merritt. He recently served as a commentator for Udit’s 2022 NPC Teen, Collegiate, and Masters National in Pittsburgh, PA. Hours before passing, Ward even shared a video on his YouTube channel.

According to Rx Muscle’s Dave Palumbo, Ward was complaining to a friend that he thought he pulled a left rib. Palumbo said the suspected injury was caused after carrying luggage to where he was staying for the week while fulfilling his recent livestream duties.

Dave Palumbo added that Ward used a massage chair but thought the rib issue felt worse after. His friend Rich told him to get checked out by a physician, though Ward decided to sleep it off instead. After Rich texted Jerry reminding him to show up for the livestream duties on Saturday, promoter Gary Udit informed Rich that Ward had passed away.

In addition to leading a successful career as a bodybuilder, Ward received notoriety online, courtesy of his growing YouTube channel of 155,000 subscribers. As one of the more outspoken commentators in the sport, Ward always provided in depth analysis and detailed observations. Revered for his ambition and work ethic, Jerry owned a successful supplement brand and personal training program called Bios3 Training.

Remembering Jerry Ward and his Contributions to Bodybuilding

You can find Udit’s full statement regarding the matter below:

“Sadly we lost a terrific friend today with the passing of Jerry Ward.
Jerry died suddenly last night. He was here in Pittsburgh commentating on the Live Stream of the NPC Teen, Collegiate and Masters Nationals.
In the NPC and IFBB PRO LEAGUE over the years Jerry was an excellent competitor, judge, expediter, head judge and PPV commentator.

His knowledge of the sport of Bodybuilding was unparalleled!
Jerry was liked and loved by everyone he came in contact with!
We are devastated at his passing. Gary Udit wrote on Friday, July 22, 2022.”

Jerry Ward’s love for bodybuilding and fitness was unrivaled and it showed anytime he spoke on the matter. He began his professional career in 1994, when he earned his personal training certification. In 2001, the bodybuilder switched gears and kickstarted a new line of work as a fitness model. After finding success, he decided to try his hand in the entertainment industry, participating in a number of acting gigs like commercials and some Television programs.

Following his career as an active competitor, Ward attracted a lot of attention for his adept online bodybuilding commentary. His shoot from the shoulder, honest and blunt nature made him the perfect commentator and ambassador for the sport.

Born on December 12, 1975, the 46-year-old Ward leaves behind a legacy of excellence and will always be celebrated for his abilities on the microphone. As of this writing, Ward’s cause of death has yet to be made public, should this change, Fitness Volt will keep you updated.

It’s with a very heavy heart that I say good-bye to a bodybuilding industry stalwart, @jerrywardii … he left us too young at 46 years old. I’ll miss his strong opinions and excellent insights on his #bios3training youtube channel…. as will the bodybuilding and fitness community. Check out my tribute to Jerry on the @official_rxmuscle youtube channel. Prayers and love to his family and friends during this difficult time.

We mourn the sudden passing of Jerry Ward. Jerry was truly one of the most passionate people in all of bodybuilding. His energy and enthusiasm for the sport was unmatched.

We will miss his strong and straightforward opinions on all things bodybuilding, and we will certainly miss the presence he brought to the mic as a commentator for bodybuilding webcasts.

Jerry Ward has been such a loyal friend to me over the years . Our friendship started when I was competing as a teen. He’s always kept it 100 with me. Even when we didn’t agree on a topic , he would always say , your allowed to have your opinion, your entitled to it. We had a podcast scheduled this week to talk about recreational drugs in bodybuilding and how we can help others struggling . We spoke almost everyday.

In 20+ years I don’t ever remember anyone ever saying a bad thing about him. We lost such a good man. This one stings .

Shocked and heartbroken to hear this. Just spoke to you a few days ago and was looking forward to seeing you @jaycutlerclassicva in a few weeks. We always laughed at how we would always see each other more out of state even though we live 30 minutes from one another and sometimes would even train at the same gym. In this bodybuilding community you meet a lot of great people that you consider family through common bonds and it’s never easy to see one go. Jerry, you were one of the great ones and you were such an incredible person that always had a fun and positive spirit about you. Always very warm and personable and always had a smile on your face and I will always remember you by that. The bodybuilding family definitely lost a good one. Strength, Love & Prayers to your beautiful wife @3rockstar8 and family during this tough time. I will always appreciate you my friend and you will always be missed. May you Rest In Peace @jerrywardii 🙏🏽

Fitness Volt staff would like to send our most heartfelt condolences to Jerry Ward’s family, friends, and especially his devoted wife Erin Merritt.