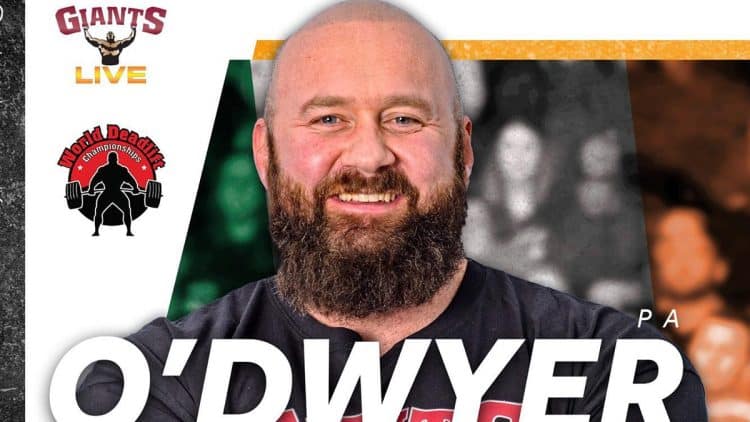 The 2022 Giants Live World Open & World Deadlift Championships are gaining momentum after several massive training lifts from their main stars. Now that another elite Strongman has been added to the lineup, things got even hotter. That person is Pa O’Dwyer, as he will make an appearance on August 6, at the Motorpoint Arena in Cardiff, Wales.

It is currently not clear if Pa O’Dwyer is filling up the Wildcard position in the lineup or serving as a replacement for Adam Bishop, who unfortunately had to withdraw due to injury. Giants Live have confirmed eleven competitors, so it is likely that they will invite another one in the next few days.

Pa O’Dwyer will probably not be the favorite for either the World Open or World Deadlift Championships. However, he give his all to surprise everyone. Giants Live has revealed that the prize money for anyone who deadlifts 505 kilograms (1,113.3 pounds) will be $50,000. The current favorites for that are Peiman Maheripourehir and Ivan Makarov, since their greatest deadlifts from training are 492 kilograms (1,084.7 pounds) and 490 kilograms (1,080.3 pounds) respectively.

Pa O’Dwyer recently came out with a 400-kilogram (881.8-pound) deadlift “for reps”. He completed one rep, while the weight plates started sliding off the bar on his second one. However, O’Dwyer proved that he can move some extremely impressive weight.

Pa O’Dwyer was supposed to compete at the 2022 World’s Strongest Man, but withdrew just before the competition started. So, the upcoming event will be his first time competing since the 2022 Europe’s Strongest Man in April.

No one knows how prepared Pa O’Dwyer will be for the 2022 Giants Live World Open & World Deadlift Championships, but he is definitely a great addition to the roster. O’Dwyer is a showman, so entertainment won’t be lacking for anyone watching the contest.

Ice Bath Benefits – Should YOU Take the Plunge?