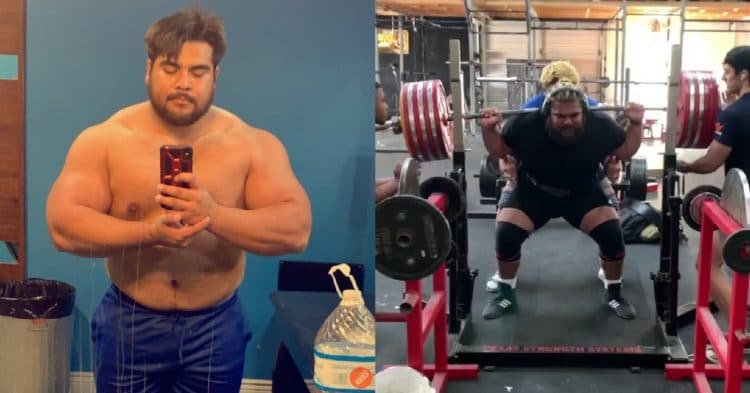 For different powerlifters, there are a variety of goals and achievements that are present in their minds. When it comes to Jesus Olivares, he was able to reach one of those goals after a long battle to get there.

If the last several months have shown us anythin, it is that this new generation of powerlifters is absolutely something special. A perfect example of that would be Olivares who, at just 21 years old, has strung together a resume of performances similar to that of a longtime vet of the sport. He holds victories in numerous events, and has already planted himself firmly in the threshold of one of the best up and coming athletes around.

Typically Jesus Olivares is known for his unbelievable deadlifting skills, having been able to pull some serious weight. However he recently uploaded a video to Instagram showing off one of his recent squat sessions. However this was not an average session, as he was able to achieve a goal that he has been working on for a while. He did this, by smashing a 903lb squat, landing himself a nice new personal record in the process.

“🚨410kg/903lbs x 1. 23lb pr🚨 Finally lol. Just finally. Joined the 900lb squat club, had to stop and look back at the path I’ve walked, the people that have walked by me and the people that’ll be with me going forward aka @blueking1029 my older brother is ab to have a baby boy 👦 💪🏾 so y’all watch out for the next Olivares in line bby 🙂 even more reason to push harder and smarter moving forward 💪🏾💪🏾
Also hit 716 for sets of 4 after!”

This was a super solid performance from Olivares, and certainly not one indictive of someone hitting a personal record. He showed absolute composure and made it clear that he was in complete control of the weight. Then again, he has been absolutely destroying his personal records of late, and not just with his squat. Here he is just a few days earlier, whipping out a new bench press PR, when he hit a 545lb single.

By all accounts, it seems that Jesus Olivares has been turning a corner in the training room, and delivering on some big performances. He is already one of the most exciting young powerlifters in the country, and these latest appearances are furthering this sentiment. It makes his next competition one to look forward to, as we will likely see some serious weight moved around.