Former Wrestling Star Jimmy Rave Passes Away At 39 After Amputations

The wrestling star died at a young age and drug abuse was one of the contributing factors. 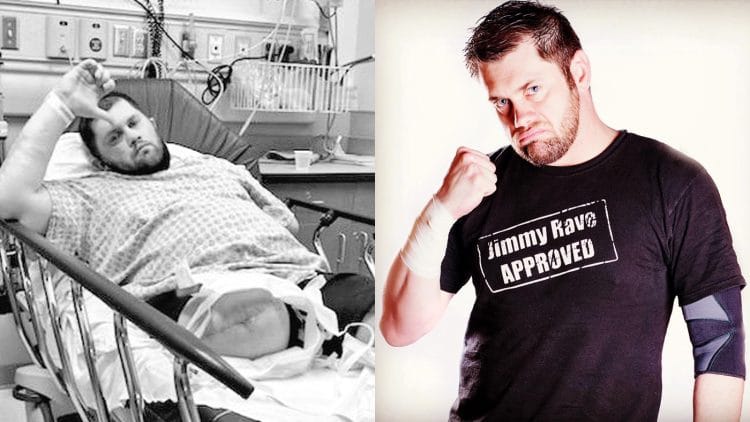 Former wrestling star Jimmy Rave died at the age of 39 after having an arm and two legs amputated due to an MRSA infection. News of Rave’s passing was first revealed by his agent on Monday.

Rave, whose name is James Michael Guffey, struggled with drug addiction for many years. According to his agent, Bill Behrens’ statement, part of the reason Jimmy Rave passed away was due to lingering complications that arose because of his past drug abuse issues.

“James had been struggling with drug addiction for many years”

While Rave’s death was not immediately clear, the Philadelphia resident admitted back in October that he was struggling to walk which prompted him to seek out a surgeon for help.

Apparently it's time for me to come clean. This past June I began having trouble walking & went to my surgeon. He determined I had MRSA in both legs & they needed to be amputated immediately. Promoters can tell you along with my peers, I've had a history w/this and would cancel pic.twitter.com/OnU2LgrKQt

“Apparently it’s time for me to come clean. Rave tweeted. This past June I began having trouble walking & went to my surgeon. He determined I had MRSA in both legs & they needed to be amputated immediately. Promoters can tell you along with my peers, I’ve had a history w/this and would cancel”

“Shows often due to this condition. I don’t know where rumors started this was due to something else, but I hadnt been to shows for so long. So where did someone see me do something? *I* have ALWAYS been honest with my past. *I* went on podcast n interviews being super candid.”

“Pro Wrestling is all I ever loved. It sucks to think that the tribe I would have died for, would say untrue things about me. I’ve gone this whole time not disclosing my legs because of this embarrassment. Sorry I fell short of your expectations. I tried … I really did.”

Speaking to his fans, the wrestling star recounted his career as the only thing he ever loved in life. In Nov. of 2020, Rave insinuated his career was over after surgeons found an infection in his left arm which required amputation from the elbow onward. Then, the star was forced to have both his legs amputated as well.

Following Raves’ death, shockwaves were felt through the entire pro wrestling community. While Jimmy Rave has passed away at 39, it’s clear he had a huge impact on the sport of wrestling and played a pivotal role during its rise to the top of the entertainment industry.