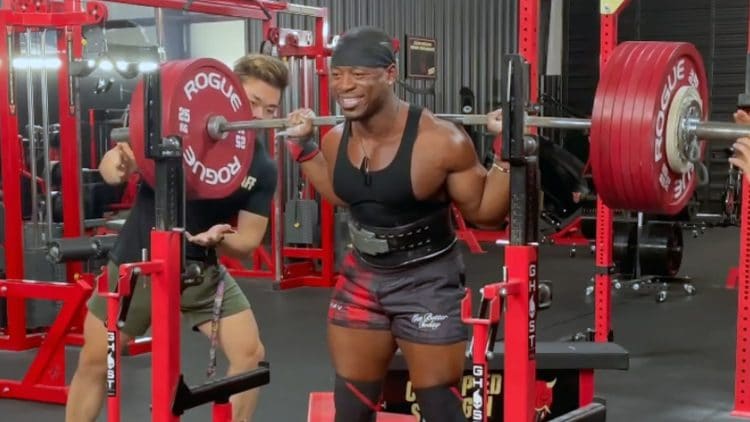 Russel Orhii seems to be setting PR’s every time he lifts. In the latest post on Russel’s Instagram, he showcased his newest squat PR, with a lift of 332.5 kg (733 lbs). Russel used a few accessories for his lift, a lifting belt, knee sleeves, wrist wraps, and his signature headband on. He smiled midway through the rep, showing his confidence and strength.

Russel’s new PR is 12 kg (26.5 lbs) over the current IPF squat world record in the 83 kg category. It could be classified as an Unofficial World Record, but Russel did not disclose his bodyweight for the lift. However, assuming he is on his competition bodyweight, which is 83 kg, this lift would be 4x his bodyweight, and that is more than impressive.

Even though Russel set the official world record just two months ago, this is not the first time that he has managed to unofficially break it. The first time he squatted more than the record was just two weeks after the IPF World Championships. Russel squatted in a commercial gym, and had the bar fully loaded with weights, coming to 329 kg (725 lbs).

Related: Russel Orhii Shares His Off-Season Workout, And It Is Harder Than You Think

Russel claimed two world records in the competition, missing out on the bench press and deadlift. Here is the full breakdown of his lifts:

The squat is most definitely his strongest asset, which he shows with his records and training lifts. Russel actually set the world record with a 313.5-kilogram squat during his second attempt. Then he bumped the weight up by seven kilograms, and now he unofficially further improved it.

Russel also had a world record deadlift performance at the IPF World Championships with a 333 kg (734.2 lbs) lift, but it was soon broken by Enahoro Asein, with a 336 kg (740 lbs) deadlift.

Squatting 4x his bodyweight, Russel Orhii is certainly one of the strongest and most dominant powerlifters at the moment. He also holds the total world record and is just 3 kg short of the deadlift record. At 26-years-old, there is a lot more to come from him, and it is just a matter of time.

Former Wrestling Star Jimmy Rave Passes Away At 39 After Amputations