See how much Joe Rogan's physique has improved since his December weigh in. 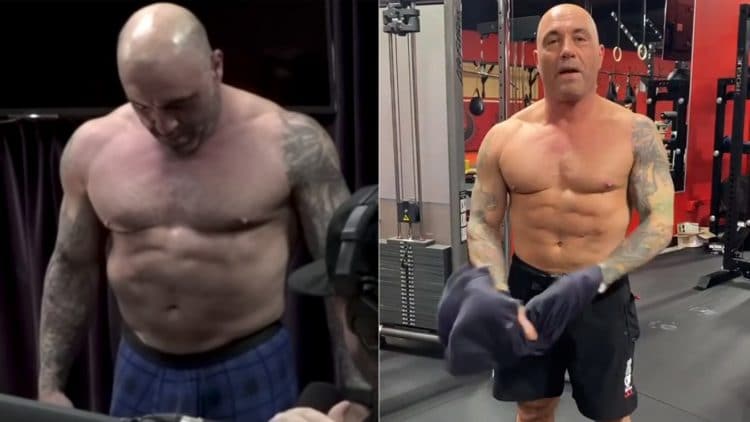 Joe Rogan may be well-known for being a comedian, UFC commentator, and podcast host but anyone who regularly listens to his podcast (Joe Rogan Experience) knows he also has a passion for fitness often advocating for a healthy lifestyle in general.

But in December of 2019, he took off his shirt and stepped on the scale during an episode of the JRE, and not only was he a little out of shape but according to him, the 205lbs that popped up was ten pounds more than he usually is. This was even after ‘Sober October’ where he and a few others abstain from drug and alcohol use and then weigh-in after, although he did say the bloat was his increased carb consumption.

But at 52, he still looked darn good besides the little belly bloat and now, he’s looking like his old, in-shape self from just a month on the carnivore diet which involves eating only meat, fish and some animal products like eggs, as well as some dairy, while avoiding fruits, vegetables, legumes, grains, nuts, and seeds.

Rogan made it clear that he saw a need for a change and vowed to lean up before the start of 2020 and the carnivore diet definitely seems to be treating him well as he looks much leaner and more aesthetic.

“Carnivore diet update: lost 12 pounds, feel amazing. Lots of aches and pains went away, and I have improvements in my vitiligo. I’m impressed.

I haven’t decided if I’m going to keep eating like this but this month was very beneficial.
Edit: the explosive uber diarrhea stopped around 2 weeks in. It’s been totally normal last two weeks. Shout out to @whoop too for sponsoring the podcast and creating a dope fitness tracker!“

He said in the video…

“So, I did the Carnivore diet for all of January, I lost 12 pounds, gained a ton of energy. My energy levels were completely flat the whole month, no ups and downs from crashing after eating. I had a belly and a lot of people made fun of me, fat-shamed me.

I lost all my fat, I Iost all the belly, I lost my love handles. I don’t know if I’m going to keep eating like this but it was tremendously beneficial. And I also have an autoimmune disorder, It’s called vitiligo, and my vitiligo improved.

I went into this thing thinking the carnivore diet was wacky but this is as good as I’ve felt in a long time, and it’s just one month.”

Now, like any diet, it can be hard to change your nutritional habits for a long period of time (especially one where you can only eat certain foods). But certain diets can definitely help to improve specific aspects of health as it did for Joe Rogan as he explained the carnivore diet helped with aches and pains, as well as with his autoimmune disorder. Not to mention, it improved his energy levels.

And this could very well work for him and prove to be an effective health strategy. But diets can be tricky sometimes when it comes to determining whether they’re both safe and effective long term as studies don’t necessarily apply to everyone.

So, if you’re thinking about implementing a new nutritional regime, make sure to do your research to avoid nutritional deficiencies, and if under the care of a doctor due to having any medical condition/s, always consult with him/her before considering any dietary changes.