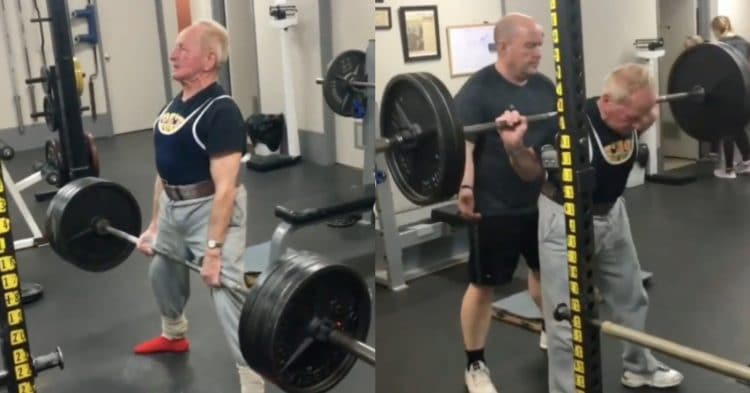 Mot 90-year olds are spending their days in some sort of personal care facility, unable to do much. However while Joe Stockinger is 90, he is doing some work in the gym that would make a young man jealous.

As far as powerlifters go, Stockinger has been warping the perception of what is possible for some time now. The Canadian athlete has been able to keep an elite level of strength into his older years, and it is always inspiring to see.

After nine decades on this Earth, Joe is still able to put together some jaw-dropping performances on the powerlifting circuits. Every time we see him in action, he is doing something that defies the logic of what someone his age should be capable of.

This was on display in a big way recently, when Joe Stockinger had a crazy training session in the gym. The video of his sesh was posted to Instagram after it was shared by one of his friends.

The pair of clips in question, see the senior citizen hitting the gym and doing some incredibly inspiring work. Not only can he be seen doing a massive 405lb deadlift triple, but he also squats 225lb for a solid 5 reps.

That was a stellar showing from the man who never ceases to inspire and impress. Joe is just as strong as people who are more than half his age, and he makes it look nearly effortless.

The fact that Stockinger has been doing powerlifting since he was in his twenties is absolutely insane, too. We have some people lift heavy later in life because they got into the sport late, but he has been moving weights around for nearly 70 years.

On top of that, Joe is not even done competing. His last contest was just over a year ago, at the Canadian World Championships, and he won in the Masters (80+) Division’s 69kg division.

Here is a video from around the same time as his last contest, where Joe can be seen pulling that same 405lb, but for a double. You can tell by looking at the two, that he has somehow still been able to improve his game.

Over the years, Joe Stockinger has managed to earn several world records. Not only that, but he has gotten them throughout multiple weight divisions. Below are the five records he has.

At some point or another, we have all given excuses as to why we can’t go to the gym today, or what is keeping us from training. But if looking at 90-year old Joe Stockinger do his thing does not inspire you to hit the weights, nothing will.