Canadian Joe Stockinger still competes because he can still pull over 400 pounds. 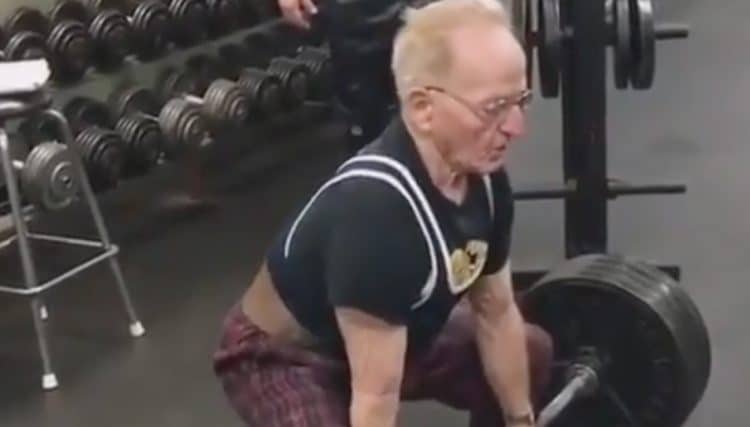 It’s inspiring to see anybody lift over 400 pounds. But when you see someone still pulling that weight, and competing, at 90-years-old, awesome is what you are thinking.

That’s Canadian Joe Stockinger for you, at 147 pounds strong. He’s 90, and is still in the competitive powerlifting circuit. Here he is being filmed for Squat University deadlifting 183.7kg/405lb raw for a double.

Here he is posted with the caption, “Strength is something we should cultivate our whole lives.”

He has a long list of competitions to speak of as well, and he’s no stranger to the first-place finish.

Stockinger has a very basic training regimen, and he doesn’t lift just to show off. If he can’t do it, he won’t. That is reportedly the secret to Stockinger’s competitive energy.

Joe Stockinger is not your average weightlifter. He doesn’t go crazy with protein and carb counting. He eats what he wants in moderation.

When you’re 90 and lifting 405 pounds frequently, there might be a sense of, if it ain’t broke don’t fix it. Lewis does note however that Joe may cut back a bit when he’s trying to cut weight and go down a class.

Related: Improve Your Powerlifting Performance With the Cube Method

Joe Stockinger might be lifting 405 pounds in his spare time. But the Open Powerlifting page has his personal best as 445.3 pounds raw. That was at the 2016 Prairie Power Open for the 100% RAW Powerlifting Federation of Canada (RAW-CAN).

He has been competing since 1983 at the age of 57 and placed first in his weight class in 25 of those meets.

His most recent first-place win was in 2019 at the World Powerlifting Championships in Calgary, Canada. He has competed in both the 67.5kg and 75kg category.