Larry Wheels notches another personal record into his belt after pulling off a massive 855lb deadlift triple, but gets injured afterwards 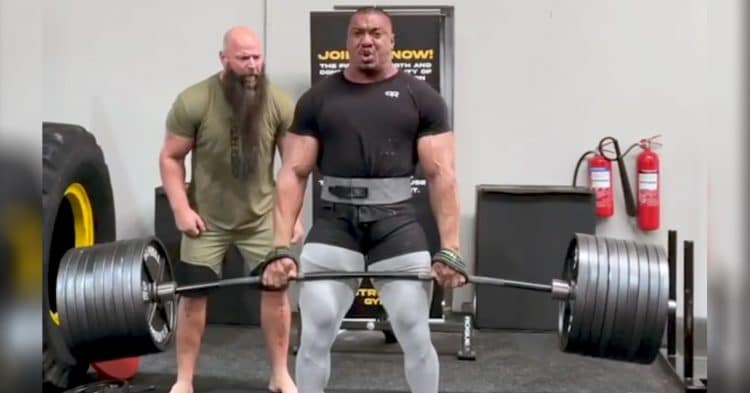 Things have been heading in a crazy direction for Larry Wheels lately, in terms of his strength levels. He clicked on a new level after scoring a new personal record in the gym.

It seems hard to deny that things are moving in an upward direction for Wheels. He spent a lot of time learning the craft of arm wrestling, and actually picked up the techniques pretty well.

After experimenting with this for a while, Larry made a return to strength training, with a focus on strongman. The powerlifter even brought in the Mountain himself, Hafhor Bjornsson, to get some pointers on his strongman mechanics.

However it was a return to his powerlifting roots that really allowed us to see just how much Larry Wheels has been improving. He had a recent training session that left him walking away with a new all-time personal record.

Posting to Instagram, the 26 year old took us inside the gym with him for a deadlift session. What ended up happening was him pulling a gigantic 855lb (387kg) for a triple, which was a personal best.

This was an epic showing from Wheels, and it got the attention of several members of the strength world. They flooded the comments with praise for such an impressive accomplishment.

“Where is the human Larry. I only see android larry. F*cking insane 🔥💪😁” said actor and bodybuilder Olivier Richters.

This was the first deadlifting video that Larry Wheels has posted since he made his initial return to strength training, a couple of weeks earlier. Here he was seen doing a triple with 760lb.

The crazy thing about this, is that he looked even sturdier with his 855lb triple, than this one year. It defies the logic of what you would expect from someone hitting an all-time personal record.

The last few weeks have seen Larry really suggesting that he is looking to transition to the world of strongman. He confirmed that this was the case in the full video of this training session, which he uploaded to YouTube.

“I intend on doing strongman in the future,” Wheels said. “Don’t know exactly when because nothing is concrete right now, but that is my intention.”

Unfortunately this full video also revealed that Larry got injured during this training session. While doing a drop set of 685lb, he suddenly dropped the bar amidst a rep.

Following this, Wheels proclaimed to his training partner that he injured a lat. After taking a second, he explained that he plans to get it checked for a tear, but that he does not believe it to be too serious.

“Maybe it’s just muscle and not a tendon coming off the bone like my bicep.”

You can watch the injury occur in the video below:

That being said, there is simply nothing like seeing Larry Wheels doing powerlifting. He is always down to try new things, and that makes him worth following on social media, but his skills clearly lie in this sport.