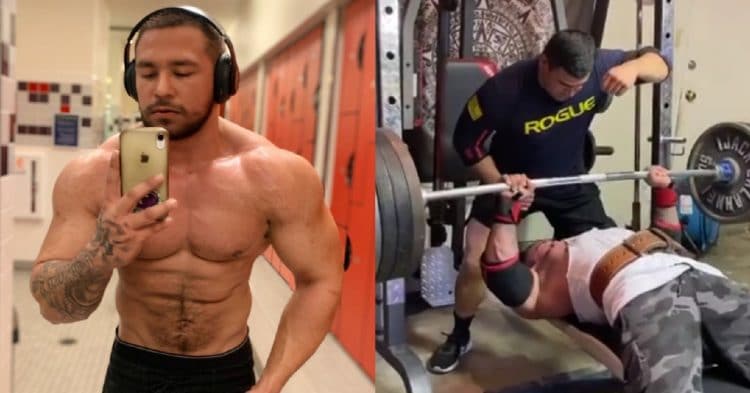 You may not be familiar with John Dade at this current point in time. However this is a 19 year old powerlifter who is going to be worth keeping an eye on moving forward.

There is not a lot known about Dade, as he is still very early in his career. Yet that does not seem to be a problem, as he has been delivering on some pretty solid performances lately. In addition to powerlifting, he also has a strong interest in bodybuilding as well. This influence has seen him take a unique approach to his strength training.

The results of this training was put on full display recently, when John Dade took to his Instagram to share a training update. Here, the young athlete can be seen tearing through a 505lb bench press, while at 225lb bodyweight. Although his form was not great, he very clearly showed a high level of strength.

“5 months ago i was benching 425 at the start of my bulk, and only weighed 204. i hit every single goal i INTENDED to hit. 500 bench 500 squat (cause surgery) & 600 deadlift . I NEVER STOPED WORKING. EVERY SET BACK. EVERY DOCTOR VISIT. I NEVER GAVE UP. every time i was kicked down, i got back up. i love what i do and this is my passion. i used this quarantine as a tool to get better . not as an excuse . and if you think this doesn’t count because i didn’t pause it, get under the bar and do this same weight. thank you god for giving me the strength and courage to keep moving forward and never giving up when others did . now it’s time to cut weight . 8 weeks”

Dade is preparing to compete in a local NPC show in about eight weeks. His physique is looking pretty solid, as this type of work is clearly paying off. Nevertheless, he is more than just physique and size, he has a clear amount of strength too. In fact, just a few days earlier he went for a whopping 9 reps on a 405lb bench.

Whether John Dade decides to focus on powerlifting, bodybuilding, or both is yet to be seen. Regardless it is certain that he a massive amount of potential for either sport.