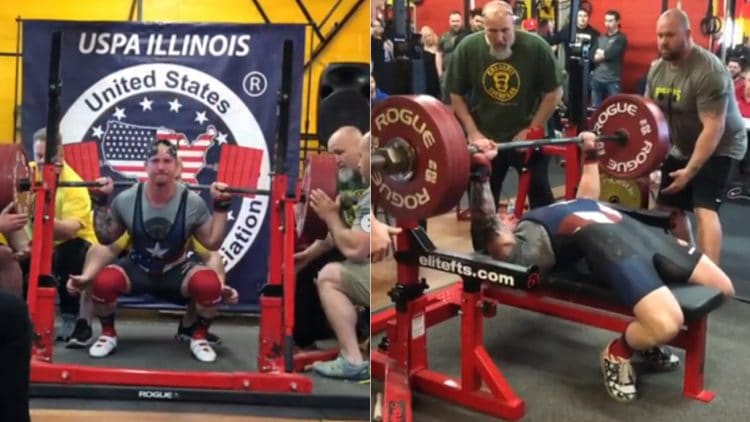 At only 26, John Haack, aka Captain America on social media is a world champion powerlifter and the raw record holder in the 181lb weight division. A feat in which he achieved in December of 2018 at only 25 years old. Haack set the raw World record with an 875kg/1929lb total beating the previous record total of 1901.4 lbs which was held by Maliek Derstine. But now, he’s surpassed this feat with a new 890kg/1962 total for a new all-time World record and the sky is the limit.

Haack then wrote on his Instagram that he’s… “Feeling ready to finally hit that 2k at the Tribute in August.”

Haack is referring to the Tribute Powerlifting meet in August which will take place in San Antonio, Texas Aug. 3-4. But it’s looking like this is entirely possible for him as he’s improved significantly in only four month’s time.

All he has to do is a total 38 more pounds to reach this milestone and he’s determined to make it happen! Last year John suffered a squat injury before he broke the totals record but now he is fully healthy (As apparent by his new record total) and his lifts should be progressing every month leading up to the big competition.

This is the Instagram post from back in December after he broke the record with an 875kg/1929lb total and back then he had his sights set high on reaching the 2,000 pound total mark.

Make sure to stay in the loop to find out if John will actually reach his 2,000-pound total goal in August…

4 Strength Tips For Guarding Your Back

The activity of John Haack over the past few months certainly shows. He recently took part in the 2022 WRPF...

The excitement is quickly building up as John Haack’s appearance is nearing. He will compete at the 2022 WRPF American...

The greatest powerlifter in the 90-kilogram weight class, John Haack, is almost back to competing for the first time since...