This was the first time John Haack managed to bench press over 600 pounds in a sanctioned competition. 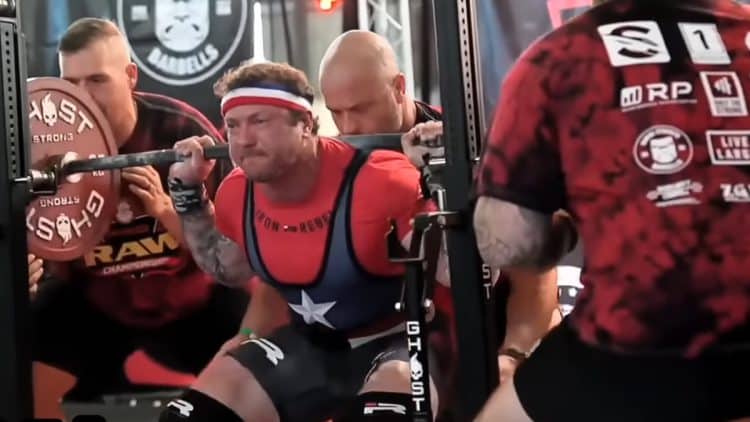 Could it be that John Haack is actually the Greatest Of All Time in powerlifting? According to his latest appearance, that would appear to be the case. John Haack took part in the 2022 USPA Pro Raw and was definitely the star of the show. The one-day competition took place on September 24th, in North Kansas City, MO, but John only needed a few minutes of action to outperform everyone. In the process of doing so, John also broke two All-Time World Records, one of which was a major bench press milestone.

The reason for his weight class jump might also be the bench press, as John Haack has been close to benching 600 pounds on multiple occasions. So, a heavier bodyweight could help him gain that advantage. He achieved this multiple times during his training sessions, but was never able to repeat it in a competition. However, that day finally came, as John Haack bench pressed 272.5 kilograms (600.7 pounds) and set a new All-Time Raw World Record. He also held the previous record of 267.5 kilograms (589.7 pounds), which he set at the 2022 USPA Hybrid Showdown 4.

John Haack’s second World Record of the day was his 1,030 kilograms (2,270.5 pounds) Total. This beat his previous World Record by a massive 40 kilograms (88.2 pounds), despite the fact that John set that record at the 2022 USPA Hybrid Showdown 4, which was just over nine months ago.

John Haack came in at 95.6 kilograms (210.8 pounds) of bodyweight for this competition, which worked wonders for him. Apart from the massive bench press, John managed to score a new competition PR squat and equal his greatest ever deadlift. So, his competition recap below also represents all of his competition PRs.

Watch all the lifts here:

The 2022 USPA Pro Raw was John Haack’s 26th appearance in a sanctioned powerlifting competition. He now has 22 victories to his name, as well as an ongoing win streak of four competitions. John also holds five raw All-Time World Records across the 90-kilogram and 100-kilogram weight classes.

Going by the nickname of “Captain America”, John Haack is definitely representing the USA accordingly. His performances keep getting more and more impressive, but he is not even 30 years old yet. So, there is no denying that John is already one of the most iconic powerlifters.