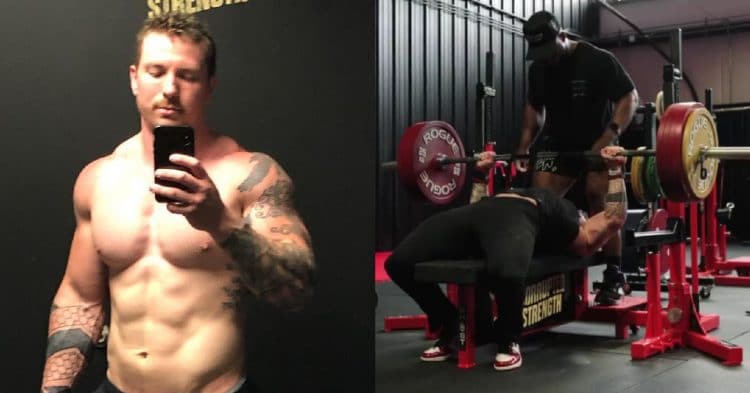 If you have been following the career of John Haack, then chances are you are used to seeing him hit massive bench press numbers. However he took things to the next level recently, by crushing his own world record in training.

As far as -83kg powerlifters are concerned, nobody benches quite like Haack. He already holds the record in that division, which he earned by pushing 512.5lb last year, at the USPA The Tribute meet. This was a record that completely overshadowed the previous best in the division, establishing John’s place as one of the best in the world regardless of weight.

Of course, like all good athletes, John Haack is not satisfied with the numbers he already has, and he has been working hard to improve them recently. This hard work finally paid off in a big way recently, as he was able to further push his world record, albeit unofficially. He did this with an enormous 551lb bench press that he hit, and posted to Instagram.

“Hitting a big 250kgs/551lb bench with @russwole today. Didn’t pack my bench shoes, so leg drive wasn’t the best. Excited for the last 5.5 weeks of training before the showdown.”

There is a lot to take away from video, starting with how utterly swole Haack is looking. Not to mention the fact that he was working with fellow lifter Russell Orhii, who was there to spot him. However the spot was not needed, as John was able to get the unofficial record, with only a slight hesitation.

This was definitely an impressive performance from the powerlifting champ. Of course, when you consider the training he had been doing, it comes as no surprise that he is looking this good. He already surpassed his record, and was doing training with bands a few days earlier.

All in all, John Haack has managed to display aton of growth over these last few months, making his next competition a must-see affair. As of right now, he has plans to compete next month. It would not be at all surprising to see him extend his world record officially. In fact the question seems to be how far he will push it, rather than if he will do so.