Jujimufu Works On His Poses With Bodybuilding Superstar Kai Greene, Who Praises His Physique 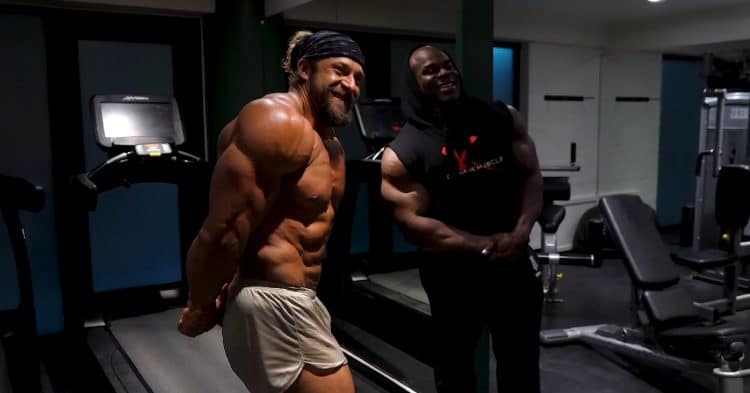 YouTube fitness star Jujimufu, aka Jon Call, has been flirting with the idea of making the jump to bodybuilding. What better way to do that, than have bodybuilding superstar Kai Greene come out and help him with his bodybuilding poses.

We recently discussed how Jujimufu was considering a move to a new sport, in bodybuilder. The gymnast and powerlifter showed off his ridiculous physique, while asking his fans if they thought he should enter a bodybuilding show. As it turns out, the vast majority of his fans said yes, practically everyone who voted in fact.

So with this new athletic venture in mind, Jujimufu decided to enlist the help of fan favorite bodybuilder Kai Greene, to help him with his posing technique. A video recently posted to his YouTube shows the experience that Call had when working with Greene. Right off the bat, they went through the eight mandatory poses for open bodybuilding competitions, which are as follows:

“Every pose starts from the floor up!”

This was the motto that Greene recited during this whole training session. Throughout the whole posing process, Greene is extremely complimentary of Jujimufu’s physique. Then they start working on the specifics of some poses to focus on the legs, getting away from the mandatory poses.

From this point, the pair works on a variety of different stances, breaking down what muscle groups they display. Kai shows Jujimufu how to flex and position himself, so as to best show off each of his muscles, and appeal to his strengths. All in all, Jon was looking pretty good at each pose, although his cardio seemed to leave a bit to be desired. He struggled catching his breath pretty early on, which can be a big problem when it’s time to go on stage.

“The discipline of competitive bodybuilding is so important,” Greene said. “It can not be separated from the art form. Once you separate it from the art form, that’s when it becomes the other things that people talk about; PEDs, numbers, and other nonsense.”

Watching the video, two things are clear: Jujimufu has the potential to be a beast on stage, and Kai Greene absolutely loves bodybuilding. This is what the pair talk about at the end of the video, as they wrap up this great learning experience. Kai encouraged Jon to do a show if he wants to, bit he feels like Call has already done a ton of growth without competing, and he is successful no matter what.