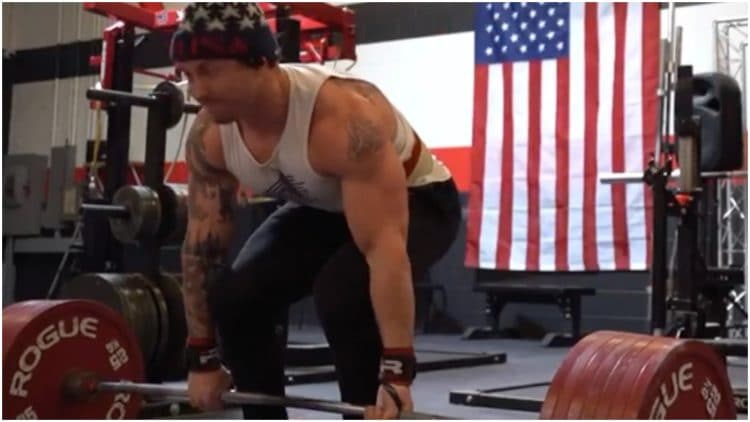 John Haack continues to show why he’s such a dominant figure in powerlifting today. Once again, the all-time record holder in the 90kg weight class is dropping jaws after a video of him deadlifting 405kg/892.8lbs is spreading across social media like wildfire. John Haack’s setup and lift of 892.8lbs appeared smooth and he broke the floor impressively.

A week prior to this powerlifting feat, John Haack took to Instagram to share a video of him deadlifting 400kg/881.9lbs. Interestingly, the 28-year-old’s motion on the 400kg lift is comparable to the way he moved during his heavier pull just around a week later (Monday, November 29, 2021) at the astounding weight of 405kg/892.8lb. It should be noted that his weight clocked in at 96.8kg/213.5lbs for the pull on Nov. 29.

John Haack Continues To Impress In The Training Room

As of late, John Haack has been consistently pulling 400kg or more in the gym. The record holder continues to make gains in the training room and if this lift is a preview of what is to come, the world is in store for something special.

Check out John Haack’s post below, the powerlifter utilized a mixed grip while wearing a lifting belt and wrist wraps for the deadlift on Monday.

John Haack’s 405kg deadlift matches his PR back at the 2021 World Raw Powerlifting Federation (WRPF) Showdown where he managed to rank first overall. There were notable differences between his deadlift from Aug. while training for WRPF, until now.

During his Aug. training, the 28-year-old grappled with the 405kg pull and appeared to struggle to the lockout. Conversely, Haack’s recent lifts, and especially on Monday in the training room, looked almost casual. A noticeable difference from just a few months ago.

If Haack is able to add 2.5kg to the gym record he already pulled while dropping a little weight, then the powerlifter could possibly rewrite the history books once again. After successfully deadlifting 405kg/892.8lbs in practice, all eyes will be on John Haack when he is tasked with his next sanctioned meet.