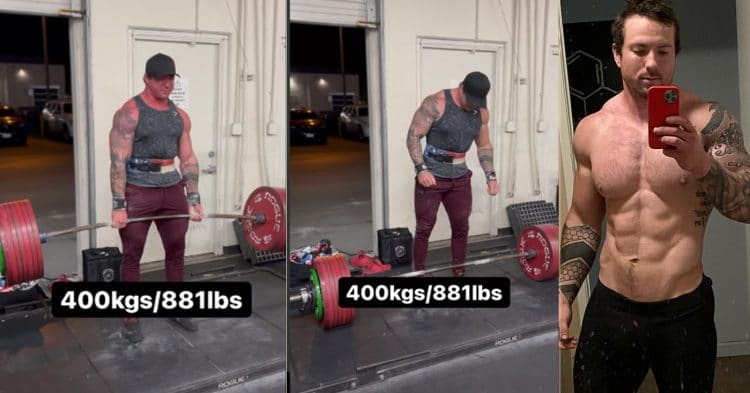 Powerlifter John Haack recently deadlifted a preposterous 400kgs/881lbs in the gym and says it was the “easiest it has ever felt“. While pulling this much weight off the ground is impressive for anyone, Haack competes at 90 kilograms or 198 pounds… yes, 198 lbs!

While we don’t know exactly how much he weighed during this lift, his body weight to pulling strength ratio is out of this world and comparable to 300+ lb Strongman behemoths and other elite deadlifters.

The lift was done using a lifting belt and wearing wrist wraps.

John included a response to powerlifter Andy Huang in the Instagram post. The latter responded to the clip in the comments with “Taking the easy way out…not the hardest worker in the room.”

Hacks Past Performances and Feats

Haack is easily one of the greatest strength athletes of our time. At just 28 years old, the chemist has competed in and won many competitions and continues to get better and better. Not to mention, he’s set many records and currently holds a few.

He holds the raw (without knee wraps) record in the 82.5kg weight category which he achieved with a 907.5kg total in 2019. This performance beat his own previous records from the same year and 2018. In 2019, he also set the 90kg raw without knee wraps world record.

Most recently, the beast lifter totaled 1005.5kgs (2216.8lbs) at the WRPF The Bucked Up Showdown, setting a raw all-time world record at 90kg body weight and is the only athlete in his category to total more than 1000 kg. His best deadlift for this showdown was 402.5kgs/887.3 lbs.

Before this, John nailed an 892 lb or 405kg deadlift in training which was an unofficial world record.

With an underwhelming two failed 400lb deadlift attempts and a second-place finish at the 2021 Kern US Open on April 24, 2021, Haack redeemed himself with an incredible subsequent performance at The Bucked Up Showdown on September 25, 2021.

While we don’t know what’s next for Bilbo Swaggins, we do know this lift could be a preview of what’s to come. If this weight felt easier than it ever has then we might expect a performance from him that’s better than he’s ever done.