John Haack totals 1005.5kg at WRPA Showdown 2021 which was a world record for his weight class and others 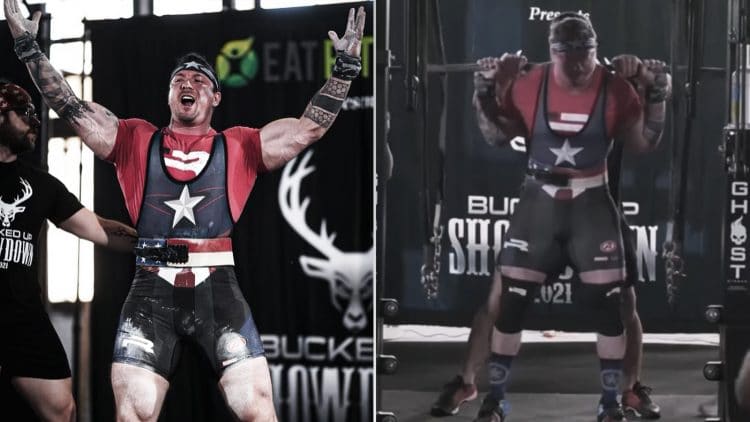 Saturday was a special night for Haack as he also broke the raw record in two weight classes above his own. Yuri Belkin (972.5kg) and Jamal Browner (1000kg) held the previous world records in the 100kg and 110kg weight classes, respectively. While he beat Browner’s record by a narrow margin, Haack took a substantial 28kg lead on Belkin.

As per the Showdown regulations, John Haack performed all three lifts raw. While he used wrist wraps and a weight belt for bench presses, Haack did not rely on other equipment like deadlift suits or knee wraps.

However, the 28-year-old has elevated his game multiple levels above since making a move up to 90kg weight class in early 2020. Haack created the raw 90-kg weight class world record by lifting 932.5kg in his divisional debut. He broke previous record holder Jesse Norris’s record (922.5kg) that was set in November 2015.

John Haack expressed his joy in an Instagram post a day later and revealed that he strained both his quads during the third squat.

“Did the damn thing. Broke one of my lifetime goals of 1000kgs at 90kgs yesterday. Didn’t help I strained both quads on my third squat, but with @that_hugeasian_guy we made the right number calls to secure the goal.” Caption to John Haack’s Instagram post read.

With the Herculean 1000.5kg lift on Saturday, John Haack not only got the redemption but also beat Penson’s world record. The lift, which was nearly 11 times Haack’s bodyweight, certainly makes a strong case for John Haack to be considered among the greatest powerlifters of all time. What’s more? Haack is only 28 years old and has a lot of time on his side to break his own record.

Editor’s note: Initially, this article read that John Haack totaled 1000.5kg and squatted 335kg, however, Haack himself provided an update to include the weight of the squat bar which is heavier than a standard barbell. We’ve updated the details accordingly.