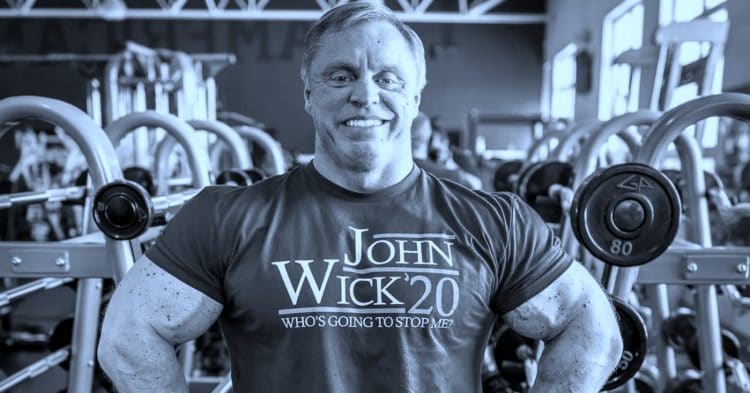 The bodybuilding and greater strength sports community was collectively heartbroken to hear the news that John Meadows had passed away. Now there is a way to help his family through this difficult time.

Meadows was 49 years old at the time of his passing, making it one of the most unexpected and shocking bodybuilding deaths in recent memory. This devastating news was made worse by how much of an impact he had on the sport and the community at large.

Following his passing, an outpouring of messages came flooding in from people who had their lives touched in one way or another by the Mountain Dog. It was clear that he was an important mentor, friend, and inspiration to countless athletes over the years.

Now there is an opportunity to help support John’s family through this hardship. Carbon Culture’s Jeff Cavaliere helped to set up the John Meadows Memorial Fund on GoFundMe, where proceeds will go directly to covering costs of John’s funeral, and to helping his family during this time of need.

Along with the GoFundMe, which at the time of writing sits at just under $78,000 of its $100,000 goal, Jeff Cavaliere wrote a description that referenced the type of man John Meadows was. Here he poured his heart out to express how much of an impact the Mountain Dog had on him and countless others.

“John Meadows was an iconic member of the fitness community who touched many through his youtube channel and coaching. With his ‘give first’ mentality, John helped millions achieve better fitness and strength…one video at a time. His contributions to the industry are countless, however most notably the Meadows Row (named after him) has become a staple of back training for lifters worldwide,” Cavaliere wrote.

“As physically strong as John was, his greatest strength was his dedication as a father and husband. Never one to miss a football practice with his boys or to show off their newest yo-yo trick in a video, John’s motto was ‘family first’, and he lived it every day. He leaves behind his wife Mary and two wonderful twin boys, Jonathan and Alexander.”

“If John has helped you in any way, I would ask that you please consider a donation to his family during this heartbreaking time (however big or small).

I personally am beyond shocked and saddened to hear about the passing of John. He was and will always go down as one of the true gentlemen in this industry. There’s not a soul alive that could say anything but great things about him. Whenever we would talk I could literally hear his smile through the phone when the subject of his boys came up. As fathers of twins we had an instant bond, rooted in both the extreme challenges and extreme joys that come with the task! He was scheduled to speak at my upcoming event In September and we were so excited to finally get a chance to shoot some videos together. As you’d expect from John however, he was going to fly in on the first flight on Thursday so he could be with his sons at football on Wednesday night. You will always be remembered and cherished by your fans as a truth teller, an incredible resource, and a class act. In addition to those things you will be remembered by me as an incredible father and family man for which I respected you greatly. I’m honored to have had the chance to learn from you. Keeping Mary and the boys in my prayers.

It is clear, not only by this touching tribute but also by the generous donations made to this memorial fund, that John Meadows was a widely beloved figure in the sport. His impact will be felt for generations to come.