On Thursday, IFBB Pro Jon De La Rosa sustained a microtear in his bicep and has undergone surgery to repair the issue. 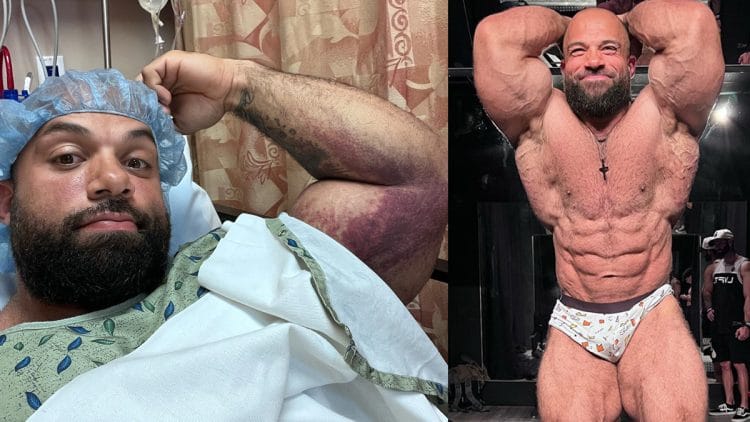 IFBB Pro bodybuilder Jon De La Rosa is recognized for his activity level and dedication to conditioning. In a recent YouTube video, Jon revealed that he sustained a bicep microtear and mentioned he will be unable to compete for the next few months.

Jon emerged as an elite competitor after winning the 2015 Wings of Strength Chicago Pro. Following his first-place showing, he earned second place at the Vancouver Pro. Capping off his stellar season, Jon took his talents to 2015 Mr. Olympia landing in 16th place. In 2016, Jon was unable to reach the podium, but remained one of the more active IFBB Pros. The following year, he made noticeable improvements to his physique and earned runner-up placements at the 2017 New York Pro and the Toronto Pro Supershow.

While Jon had a busy year in 2018 competing at four IFBB Pro shows, his best performance came in May at the 2018 New York Pro where he came in fifth. De La Rosa’s comeback season came the following year where he earned fourth place at the New York Pro. Entering the 2019 Puerto Rico Pro, Jon’s conditioning blew away the judges and he won the show. Next, he picked up arguably the biggest win of his career after claiming victory at the Toronto Pro Supershow taking home gold. After earning an invite to 2019 Mr. Olympia, Jon took to the stage and improved from his 16th place debut in 2015 to 12th.

Jon took a step away from competing after 2020 where he managed to place third at the New York Pro. Nevertheless, he has remained busy inside the gym and hasn’t slowed down when it comes to training sessions. However, before the bicep microtear, an imminent return was on his mind.

In a recent interview with Dennis James, Jon De La Rosa reveals how the injury happened and speaks on his potential return to competition.

“Thursday, it happened on Thursday. Unfortunately, I was training back. Everything was good, this was on Tuesday. Wednesday was my rest day. Thursday, my two dogs, my small dog, he’s scared of thunder. So, I went to go pick him up, everything seemed fine. I went to go put him down, and my bicep stayed contracted. I was like, that’s not good.”

“I went to go pick up my dog, he’s a 35 lb dog. I picked him up, I was consoling him, making sure he’s okay from the thunder he was scared of. It wasn’t this guy back here but the little guy is a 30 lb dog. I went to pick him up, I set him back down and my bicep kind of just stayed there. It’s a very small tear. It’s a micro tear. I just got my MRI results back but unfortunately, I can’t compete until August, maybe September.” Jon told Dennis.

Jon has made an effort to maintain a career outside of bodybuilding. He’s eying a return to a show but accepts it will take some time to heal.

“I hadn’t announced anything because I was, most people took the year off to build the gym out here in South Florida, with my training partner. I tried to be a little smarter as bodybuilder than a lot of the guys that I compete with. I don’t try to blow through the money that I make, I try to keep my career going outside of bodybuilding. So I took the year off to do that. Of course, I was off of everything. I wasn’t training as hard. I used it as a time to let my body heal. I got back into it, I was training really hard, the muscle was coming back on fast. Patrick and I put together a really great plan and it was coming together really well.”

De La Rosa details what his plans were prior to incurring the injury, and revealed that his intention was to return at the New York Pro.

“I was shooting for sometime in May, June, around there but I hadn’t decided on anything. I was hoping to jump into the New York Pro because that’s home for me obviously. So a little bit heart broken there but it looks like I’ll be able to get back on stage some time in August, September. this means, they’re telling me it means at least 2-3 weeks without anything. Any weight baring on it, nothing at all.”

De La Rosa updated his fans on Instagram and shared that he was heading into surgery for the microtear on his bicep.

Given his experience competing at the highest level, Jon realizes that his body has taken some damage along the way. It was also hard for him to believe that of all things, it was picking up a 30 lb dog that led to his bicep microtear.

“You know I think the biggest takeaway from me for this, is that I’m getting older. Right, I know I’m young, I’m 37. It’s like the physician was saying, when you’re doing this, I’ve been doing this over 20 years. I been doing this since I was a kid. Some sessions are brutal all out, you’re dragging yourself out and some sessions are like everyone else. They’re good, you’re not dragging yourself out of the gym, you’re not killing yourself but over 20 years the amount of obsessions that I put on and beat up my body was a lot.

I was beating myself up because I’m like fu*k that was my dog. How did I do this? He was like dude you could have picked up a glass of water the wrong way with the way the tendon was, the way the bicep was and it could of went. You can’t beat yourself up over it, it was a freak accident. That’s the thing, I’m glad I didn’t have a 100 lbs that I’m trying to muscle the thing up and have it really tear. I’m glad it was a 30 lb dog and not that big of a deal but it is going to take me off from competing for a month or two.” Jon De La Rosa shared.

After a freak accident resulted in a bicep microtear, Jon plans to return to competition in Aug. or Sept. Jon will be taking the next 2-3 weeks off from exercising his bicep to properly heal from surgery.