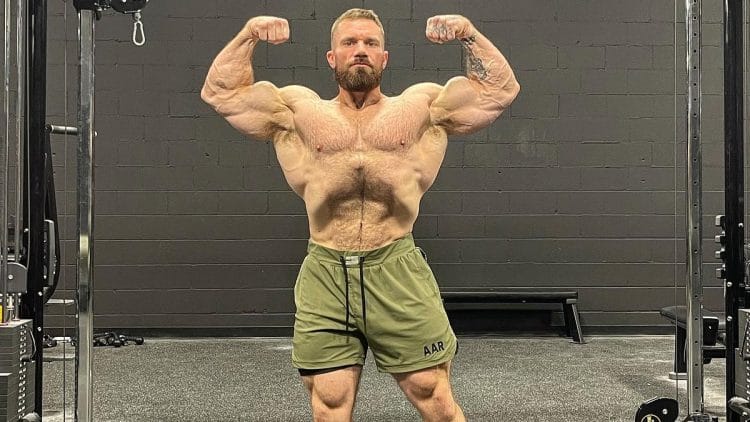 Maintaining an incredible level of fitness, IFBB Pro bodybuilder Seth Feroce has remained a popular figure in the sport for the past several years. In a recent YouTube video, Seth addresses the rising number of deaths in bodybuilding and warns upcoming Pros of the dangers stemming from steroid abuse.

Seth Feroce was a prominent name competing as a bodybuilding professional during the 2000s. While he’s been out of competition for nearly a decade, Feroce has continued working out in the gym to maintain a healthy physique. Instead of utilizing traditional bodybuilding exercises, Seth switched to high intensity functional training to facilitate a healthier life and challenge himself. While he has no firm plans of returning in mind, Seth has been priming his body to stay healthy and revealed recently that he cut out gear.

A vocal critic of steroid abuse, Seth believes they are the number one problem in the sport leading to sudden and untimely deaths. Athletes have continued to pass away at an alarming rate since last year. In 2021, 2018 Mr. Olympia Shawn Rhoden died at 46 of a heart attack. George “Da Bull” Peterson died days before 2021 Mr. Olympia due to heart issues. In addition, Dallas “Big Country” McCarver is also believed to have passed away due to heart complications.

Last week, the bodybuilding community was hit with a massive blow after finding out that 2017 Arnold Classic champion Cedric McMillan died at 44 years old. While a cause of death has yet to be confirmed, many have since spoken out about the inherent dangers connected to bodybuilding. In addition, his wife has cleared the air in regard to speculative reports, writing, ““Cedric’s cause of death is unknown at this time. It did not occur on a treadmill, nor is it known to be the result of past COVID or vaccinations.” Given the tragic circumstances, bodybuilder Seth Feroce is speaking up since he believes no is right now.

In an expletive-filled rant on YouTube, Feroce vehemently opposes change in the sport and issued a warning to every bodybuilder abusing steroids.

“I knew this day would come whenever I had to make this fu**ing video. It seems that nobody is saying it and everybody wants to hear somebody say it. And everybody is trying to think of a way to say it without sounding like a complete fu**ing prick but about bodybuilding and motherfu**s dying. So it seems I’m going to be the motherfu**r to say it. Steroids will kill you. You get it. They fuc**n will kill you. They will kill you. That’s it. Bodybuilding is made up of the craziest  motherfu**s on the planet we are all fuc*ed up and crazy. We love it.

There is no saving this sport or what can we do to make it better make it more healthy. No, it’s the one fuc**n sport that has no rules motherfuc**r. Be as crazy as you want to.That’s why we all loved it. That’s why I loved it. That’s why everybody is attracted to it, because it’s full of phychos. Now, everybody under the sun before they fuc**n take them, knows it will kill you. It will. It is detrimental to your health. There’s no fuc**g hiding it. It’s over. You know why? Because the one thing in common with everyone fuc**n dying is that they’re a professional bodybuilder and they all took a massive amount of gear.” Seth Feroce said.

According to Seth, he believes the sport is addictive.

“The hardest part about this is admitting we are all fuc**ed up and crazy and we are addicted to this sport. We love it. It’s an attraction that we cannot control. There is nothing like training back on a 1000 migs of test, 400 migs of tren, and two fuc**n Anidrol. You ain’t touching that sh**. You’re a fuc**n animal. Yes you are but at some point you have to stop doing that. Do you know why you have to stop doing that? Because it will fuc**n kill you and we all know it.”

Feroce is adamant that the sport of bodybuilding doesn’t need to be saved. As athletes get older like himself, children enter the picture, and longevity becomes much more important. Following years of using gear and competing at shows, Seth believes he’s now in the healthiest shape of his life since stopping.

“That’s the truth of it all, and anybody saying, ‘how do we save our sport?’ No! You’re paying to play motherf**r. You’re playing with fire and we all know it. I’m tired of everyone pretending. Motherfu**r I knew I was taking years off my life but I didn’t give a fu** because I wanted it that bad. The thing is, eventually you continue to grow in life, other things occur in life.

You have children, you start to grow up, you start to realize maybe I should stop doing this sh**. Fortunately for me, it happened when it did when I tore my tricep I thought the world was over. I thought everything was going to come crumbling down. No. It was actually a blessing in disguise because I got my sh** together and now I’m in the best shape of my life. Literally the best health of my entire adult life is right now.”

Despite living a healthier lifestyle nowadays, Feroce maintains that his problems of the past will eventually come back to haunt him. In addition to warning upcoming bodybuilding athletes, he also mentioned that his days are numbered too.

Feroce on Making Changes to Facilitate a Healthier Lifestyle

Seth has gone to great lengths to improve his health in the last two years.

“Over the past two years me switching from the bodybuilder-style lifestyle to this much more healthy… still do my bodybuilder workouts, still doing my push and pulls. I do my legs and that’s part of routine but I also do the functional workouts. I do the sandbag workouts and I do all that. It’s because I’m choosing that because I want to do something else that’s way fu**n crazy and intense for benefitting my health and my life.”

Feroce doesn’t want the sport to change. Instead, he states that the people who have a problem with steroid abuse should simply not watch.

As one of the more vocal critics of steroid abuse in bodybuilding, Seth Feroce is making sure that athletes understand what they are getting themselves into. Following a wave of recent deaths in the bodybuilding, Seth believes there is no saving the sport.