Jordan Mica is an 8-year-old powerlifter and wrestler who has big potential! 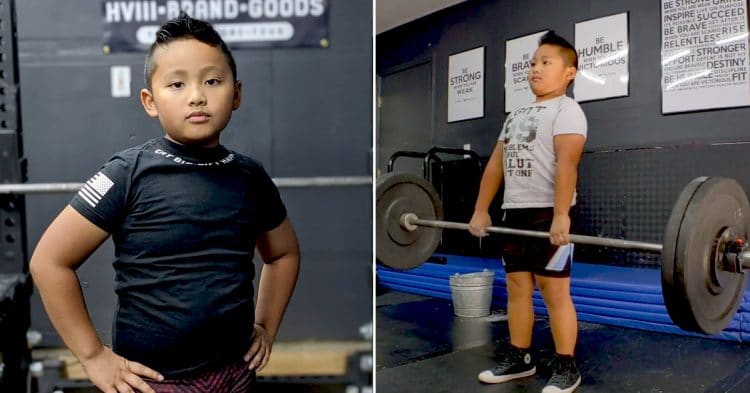 Jordan Mica is just 8 years old of which he recently turned in late March and he’s already a promising young powerlifter and wrestler out of California. He took social media by storm with his freakish strength at such a young age and apparently, he has been training since he was just 3 years old.

But Jordan’s superior strength isn’t the only thing that makes him stand out. He’s also got some killer dance moves, plenty of spunk, and his own YouTube channel. So he’s definitely a normal kid living the life too.

And we actually spoke with Jordon recently to learn about his journey, training, and future plans. You can read his responses below…

How long have you been into powerlifting?

I’ve been in powerlifting for about one year.

Tell us about your childhood and how you got into powerlifting

I got into powerlifting because my brother always used to be in the gym. Jordan’s brother has about 15 powerlifting competitions under his belt. He’s still competing and Jordon has been attending since he could remember.

When did you first start lifting?

I first started lifting maybe at like 3. But that was pretty much just playing at the gym though. When Jordan was younger, he would lift a little bar in his garage while his dad was training.

Not necessarily powerlifting but just in general, what’s your most memorable moment?

My most memorable moment was meeting EvanTube in Fortnite. On Jordan’s birthday recently, EvanTube (gamer) dropped in to play a couple of rounds with him and his friends.

How do you stay motivated lifting heavier?

Jordan never gets to max out at the gym. All of his training sessions are planned and the progression and increments are very very slow. There’s never a time when Jordan is unsure about what he’s going to lift. So it’s really not necessarily about motivation for him. He enters the gym every time with the confidence knowing that whatever is put on the bar, he’s most likely going to be able to pull because it’s usually between 1 and 5 pounds heavier than his previous session.

How do you prepare for a personal record?

Jordan prepares by warming up before a competition and then attempts his lifts, so nothing too complex. It’s also important to note that he only does one-rep max lifts in competition and not in training. Jordan’s father doesn’t believe in maxing out in training because there’s a higher chance of injury.

But even in competition, Jordan stays within his limits and then he’ll attempt an all-out lift that still isn’t far off from his capabilities.

Are you using any supplements?

Jordan’s father is Filipino and his mom is Hmong so they eat a lot of stir fry meat with veggies and rice. Jordan still eats like a kid sometimes though, not missing out on foods like chicken nuggets and ice cream.

How many times a week do you train?

Like once or twice a week, but maybe sometimes three.

What’s your future goal and where do you see yourself in the coming years?

That about wrapped it up for our interview with Jordan and it seems the young, upcoming athlete has a bright future ahead. And for those concerned about him pushing it too hard at such a young age, well, he only trains and lifts within his capabilities.

His strength comes from proper training and a few years of consistency.

Check out the little guy in action just before he turned 8!

Those are impressive numbers from Jordan and he has even went on to achieve a 65lb bench press PR in training.

And if you were wondering what Lumpia is, it’s a popular type of spring roll common in the Philippines. Here you can see Jordan with his sister Jaylin (also a powerlifter) rolling Lumpia!

Young Jordan is currently preparing for his first USAPL meet in July and we wish him the best of luck. Check out a recent clip from him prep.

Jordan Mica shows a lot of promise in both powerlifting and wrestling. He’s definitely one of the strongest 8-year-olds on the planet right now. And being so young, you’ll likely see a lot more of him crushing the big lifts.

Dumbbells vs. Kettlebells – Which One Should You Use?