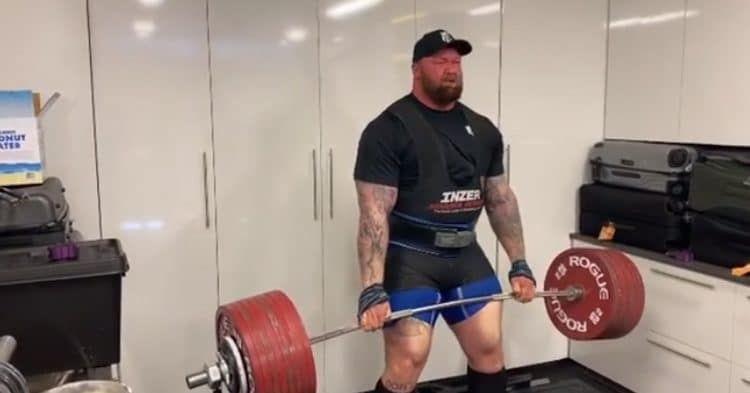 Bjornsson then tried to pull 501kg/1105lbs at the same event but was unsuccessful. However, he did recently improve upon his own Elephant bar deadlift performance in February with 480kg/1058lbs. Although, it was done in training. But it seems like he may be more ready than ever for the world record lift.

And if he can pull it off, he’ll surpass Eddie Hall‘s 500kg deadlift which currently stands as the heaviest of all time. Hall did accomplish the feat with a standard deadlift bar in 2016 and Bjornsson’s would be on an Elephant bar. Now, there is a difference between the two. But it doesn’t matter because 501kg would count as the most weight ever lifted off the floor (officially).

Thor’s decision to go ahead with the lift despite it not being in actual competition with other competitors has sparked lots of opposition. Eddie Hall is one of those individuals who had something to say about it and they had some back and forth.

But others have spoken up as well including the legendary Zydrunas Savickas and Robert Oberst. At this point though, Bjornsson will do it anyway and he recently posted a video on YouTube as part of his ‘Road to 501kg deadlift’ series.

The Icelandic Strongman trained with his father and Runar (friend and coach at Thor’s gym), where he did some squats, working up to 263kg/580lbs for a few reps. Next was walking barbell lunges outside where it was apparently freezing cold. But that’s wasn’t stopping them from getting in their training.

Thor teased that his dad was stubborn during the lunges as he appeared to have some difficulties with the weight. But no harm as long as he doesn’t injure himself.

Following the session, it was time to eat… “This is nice huh, we just train and the meal is ready here and we just eat“. Runar was also happy that his friend Hafthor cooked for him and his wife too.

“It’s my job, I’m a nice host, I like to feed my friends and it makes me happy that you’re happy.”

Bjornsson has a few sessions left before he attempts the world record deadlift as he explained in the video, and that was pretty much a wrap for now!

Tomorrow, he’ll do a 470kg/1036lb deadlift on his Twitch which should be exciting to watch. Then the countdown will begin.