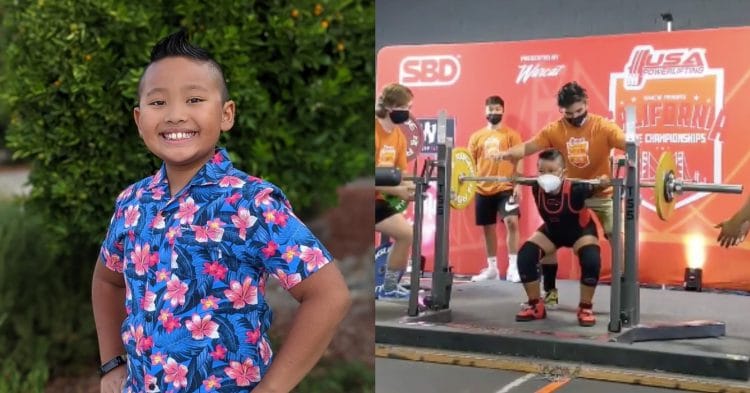 There are a ton of interesting young prospects in the world of powerlifting, but some are significantly younger than others. At just nine years old, Jordan Mica is already proving himself to be a real threat when he gets older.

There have been plenty of impressive lifts from Mica over the last year or so, adding to his resume as being one of the most talented child powerlifters in the world. He is constantly working to improve, and each step of the way he is more amazing.

However perhaps his most incredible performance of his career so far, came when he made an appearance at the 2021 USAPL California State Championships. Here he broke three American records with his 60kg (132.3lb) squat, 33kg (72.7lb) bench press, and 168kg (370.4lb) total, sharing a video of his incredible lifts to his Instagram.

“9 year old Jordan Mica set 3 American Records in the Squat, Bench and Total at the USAPL California State Championships on 9/28/21!!” reads the caption, written by Mica’s parents, who run the account.

This was a solid performance from Jordan Mica, especially when considering that he is just nine years old. To capture three records in one meet, at such a young age, is a feat of strength that is almost beyond comprehension.

Then again, Jordan is no stranger to lifting weights that seem to be beyond comprehension. Even his 75kg deadlift, which was a personal best for the young man, was insane to see, even if it was not a new American Record, and it is a product of the hard work he has been putting in.

Looking through his other social media posts, it is clear to see that Mica follows a pretty straightforward plan when it comes to his powerlifting training. Before the meet, he was seen perfecting his openers with a 50.8kg squat, a task that clearly paid off in the end.

It goes without saying that Jordan Mica is one of the most talented young athletes that the sport of powerlifting has ever seen. It is going to be fascinating to watch him grow and develop, as he will likely have years to come with his endeavors in the weight room.