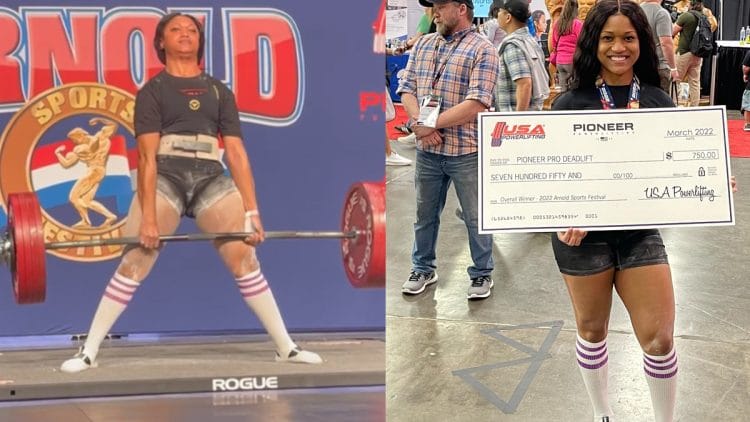 At only 22-years-old, Jordanne Panton is just entering the prime years of her life. She has always been successful, but in recent times, it seems like she has gotten much better. Jordanne took part in the 2022 Arnold Sports Festival – USAPL Pro Deadlift. She stood atop the podium with a massive 233 kg (513 lbs) deadlift. This deadlift is also the New American Record in the 67.5 kg weight class.

This competition only had the deadlift event, and these are Jordanne Panton’s three attempts:

Jordanne weighed in at 66.62 kg (146.9 lbs), which means she pulled 3.5x her bodyweight. She deadlifts with a sumo stance, and only used a lifting belt to aid her in the lift. Her deadlift got her a DOTS score of 242.386, which was enough for a comfortable victory. The win in this competition also got her $750 of prize money.

You can watch her lifts here:

The previous deadlift American record stood at 230 kg (507.1 lbs). Firstly, it was set by Kimberley Walford at the 2013 USAPL Raw Nationals. However, at the 2021 USAPL Virginia Pro, Samantha Calhoun tied the record by pulling the same weight.

Jordanne managed to beat their record by 3 kg (6.6 lbs). However, Samantha Calhoun is still active and will definitely attempt to reclaim her past record.

It is easy to think that Jordanne Panton is an inexperienced powerlifter because she is very young. However, Jordanne has been competing since she was 14-years-old, and has taken part in 23 sanctioned competitions. She has won 17 competitions and became a multiple-time American champion. Jordanne has also placed 2nd in both the 2016 and 2018 IPF World Juniors & Sub-Juniors Championships.

The majority of Panton’s competition PRs came from the 2021 USAPL Europa Dallas Showdown, as she was incredibly strong and consistent.

This could be just the start of Jordanne  Panton’s record-breaking performances. She still has a long career ahead of her, and already has an enormous fan base which wants to see her succeed. She has not revealed when her next competition will be, but judging by her training videos it looks like she will improve the majority of her PRs.

How to Build A Bigger Chest Without Barbell Bench Press