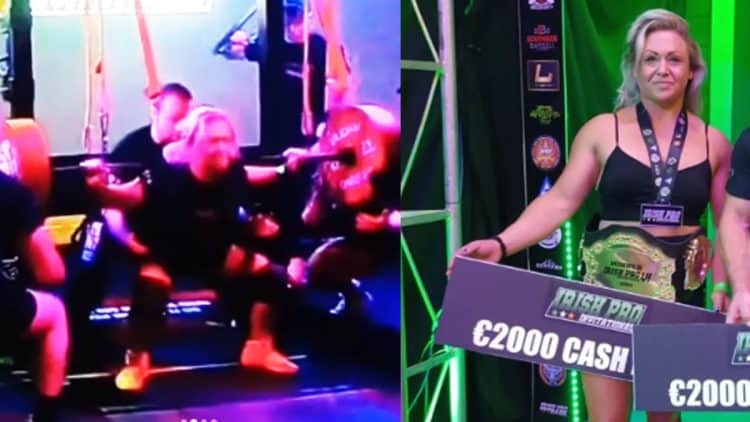 Julia Mills has gained a reputation for being one of the greatest pound-for-pound powerlifters in the UK after putting up some dominant performances in the 75-kilogram weight class. However, it looks like she wanted another challenge, since she jumped up to the 82.5-kilogram weight class in her recent competition. The 2022 IrishPO Irish Pro Invitational VI took place in Limerick, Ireland, on August 28, and Julia competed in the Raw With Wraps division.

It turned out that Julia Mills was more than capable of dominating the 82.5-kilogram weight class as well, since her Total of 612.5 kilograms (1,350.3 pounds) is the new All-Time UK Record.

Julia Mills successfully completed eight of her attempts, only missing her final squat. In addition, she has scored all of her competition PRs at this competition, so it was obviously her greatest career performance so far.

It is also good to see that Julia Mills was awarded accordingly, since the 2022 IrishPO Irish Pro Invitational VI gave out identical prizes to the male and female divisions. So, she went home with three All-Time UK Records and €2,000 ($2,011).

“Brilliant atmosphere huge thanks to @shanebrodiepowerlifter for running such a fabulous event huge step forward for female strength sports that the female prize money equalled the male prize just amazing to see💜.”

This was Julia Mills’ 10th sanctioned powerlifting competition and what is most impressive is the fact that she has won all of them. Since Julia began her career in 2018, she’s had a busy schedule.

Julia Mills is 44 years old, but that does not play a big factor in her performance, which was evident at this competition. Her performance was not only the best of her career, but it was one of the best showings ever by any powerlifter from the UK. There is no clear picture of Julia’s next move, but she is likely to continue training in the hope of pushing these records even further.