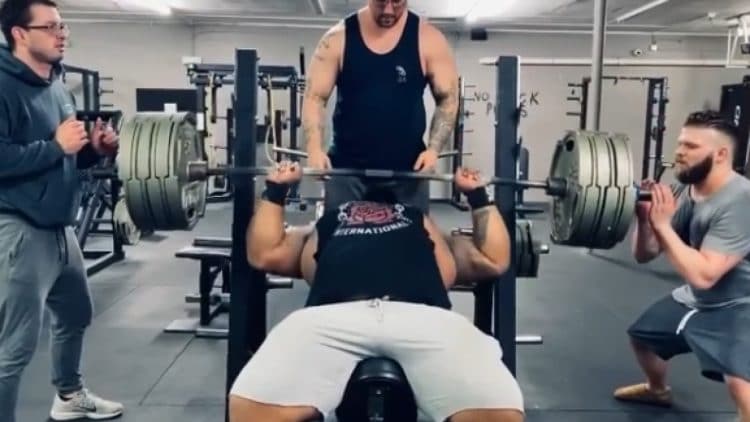 Julius Maddox is perhaps the most intimidating powerlifter in the world today. He showed off his ability big time, with a huge session in the gym.

Maddox is one of the best athletes competing today. He has won every single powerlifting meet he has competed in, making a name for himself along the way. His imposing size, and impressive strength has been enough for him to earn a reputation for being one of the sport’s best. Specifically, he has a huge skill with his bench press in particular.

This bench pressing skill was put on display again recently, in the gym. He posted an update to his Instagram, as he hit the weights big time. He managed to hit a 600lb incline bench press, and did it for three reps. All the while, looked like he may as well have been lifting 100lb. It was ultra impressive to see.

Featured in the video, alongside Julius Maddox, is his friend Joshua Patterson, as well as other spotters. It certainly must have made some nervous, seeing him attempt this lift. However, the spotters were unneeded, as he breezed through the bench press like it was nothing. He absolutely destroyed it, and seemed ready for more.

Maddox has not competed since last month, at the WRPF Rob Hall Classic II. It was here, that he set a new All-Time World Record for his bench press, hitting 744lb. Therefore, it comes as little surprise that he hit this 600lb lift with such ease. Nevertheless, it was still impressive to see, especially for three reps.

Julius Maddox never ceases to impress with his bench press, every time he competes. At age 32, it seems likely that he will be able to extend his world record even farther. Time will tell however, as he continues to compete.

How Deep Should You Squat?