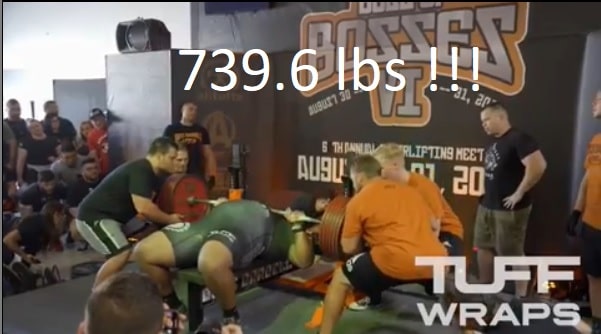 Hot damn, that’s a lot of weight! Julius Maddox is a superheavyweight American powerlifter who only had one dream-have the biggest raw bench press in the world. Bragging right many gym goers would be willing to sell their souls to the dark lord himself in order to possess.

He has been on a tear recently, as he broke the American bench press record a month ago.  This weekend he took another item off his bucket list, the biggest weight ever bench pressed raw. Like I already mentioned, those are bragging rights many men would die for.

As you can see in his Julius’ Instagram post, the bar movement went frighteningly easy but during the lockout phase, he lost control over the bar.

However, the judges gave him the thumbs up and declared it a good lift. It didn’t take long before the former record holder, Kiril Saryvhev, took to social media to congratulate the new bench press king. Here’s what the Russian behemoth had to say;

You are the beast brother @irregular_strength 😬😁 Congratulations 🔥 And thank you for the motivation 🙏 See you on platform 😉 @eddiehallwsm are you with us ?)

Looks like the Russian won’t let go of his record without a fight and not only that, it seems he’s calling out Eddie Hall to join him in the epic quest of owning the bragging rights of having the best bench press on the planet.

Remember, Eddie Halls has been amusing the idea of trying his luck in breaking the said record. So this callout by Kiril, isn’t just him being a wacky Russian and calling out random strong guys he sees on Instagram.  Should Eddie accept, we might have an epic powerlifting threeway for the ages!