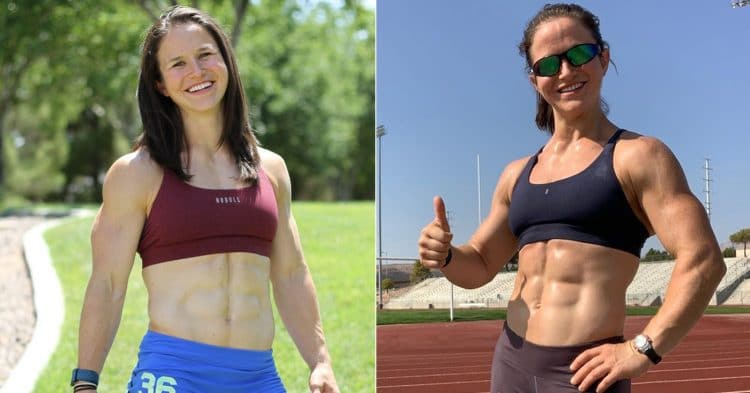 There was a lot of unique changes athletes had to make for the 2020 CrossFit Games. After having to come from behind, Kari Pearce feels that she will be better prepared heading into the finals.

For many years, Pearce has been one of the best CrossFit athletes on Earth. Heading into the Games this year, she earned the honor of being the fittest woman in America by being first in her division in the U.S. during the Open. At first things were not going to plan, with her starting off at a rocky 15th place, but she was able to turn it around to end Stage One in fifth place. Now she looks ahead to Stage Two, and spoke in an exclusive interview with FitnessVolt about the struggles she had in Stage One, and what we can expect to see from her in the finals, next weekend.

Kari Pearce Reflects On Stage One

The format for this year’s Games has been different, due to the lack of ability to have all the contestants in person. Therefore it was revealed that the event would take place in two parts, athletes from around the world competing in online qualifiers in an attempt to be the top 5 men and top 5 women and compete in the second part a few weeks later. For Kari Pearce, Stage One was an overall good experience, but there was aspect of it being online that was tough for her to deal with.

“Overall I feel good about Stage One, especially since I was able to pull myself into the top 5 after being in 15th place after the first 2 workouts. I put my best effort forward so I am proud of that,” Pearce said. “I was happy that we were able to have a CrossFit Games this year. It is hard with all the craziness going on but cool to see all of the work we put it paid off. The hardest thing to adjust to was not knowing how other athletes did. We are used to having other athletes right next to us but this year we couldn’t see the scores until after everyone finished.”

As for the events in Stage One, there was a lot of familiar workouts, but with a more intense twist. Obviously they were needing workouts that were challenging, but also able to be done in your average box around the world. Although Kari knows that she has room to grow with some of the areas that she struggled in, she enjoyed the workouts for the most part.

“I thought Stage One was a very good test,” she explained. “My favorite workout was either Diane or Annie. I love handstand push ups but I also enjoyed the combination of the new jump rope, GHDs and power cleans. My least favorite was the Front Squat. It is a work in progress though.”

Looking Ahead To Stage Two

With the finals of the CrossFit Games just around the corner, Kari Pearce has been working hard to make adjustments to her training for Stage Two. She always trains hard, but she says that she is taking things to the next level to get ready. I’m particular, she is expecting there to be a ton of running when these ten athletes come together at the Ranch in Aromas, California, so she has been getting herself ready for that.

“I am continuing to train hard. My coach has added a lot more variety which is usually the case before the Games but was obviously different this year due to the format. I normally train with Ryan Elrod so continued to do that and Danielle Brandon and Bethany Shadburne came to Las Vegas to train with me,” Kari said. “My coach has added more volume and intensity so I will be ready for Stage 2 and whatever tests we have to go through. There has been a lot more running because we know we will see that at the Ranch. I am continuing to push hard in all of the workouts that I do.”

In terms of her diet and nutrition, Kari has been packing on the carbs. This helps her with energy throughout her training sessions, and recovery in between. Hopefully this will keep her fresh by the time she competes this weekend.

“Right now, I am eating a lot of carbs for energy,” she explained. “The carb I eat the most is oatmeal because I just love it! My protein and fat are about the same as they are year round. Training is intense so it is important that I refuel and recover and have enough energy. I just came out with PowerAbs in the Kitchen which is a nutrition book I helped write with a Registered Dietician so you can also learn more about what I eat there.”

As much as she knows that there will be a ton of running at The Ranch, Kari Pearce is holding out hope for some other types of workouts for the finals. In particular, she wants to see something related to gymnastics, as this is where she excels the most.

“I am hoping for lots of gymnastics,” Pearce said. That is where I shine due to my extensive background in it. I also just hope that it is a well rounded test. I feel more fit than I have ever been before so want to make sure that it shows.”

Some of the naysayers for the CrossFit Games this year do not feel like this year’s contest is as intense as previous versions of the event. Critics point to the fact that this is not in person, so the quality of competition and judging is lowered. However Kari Pearce does not feel this way, saying that there was still the same qualification process, so the best athletes are still the ones who are succeeding.

“I personally do not think (winning this year is different than other years),” Pearce said. “The format is different but we still all had to go through the same qualifying process to get there.”

The one big change that has occurred between this year and others, is the fact that there are no fans to cheer Kari on. So she wanted to make sure the fans knew that she appreciates their support, and hopes to see them root for her from home.

“I can never thank the fans enough,” she said. “Without them, what I do wouldn’t be as special or nearly as much fun. I appreciate each of you for that! I hope to hear you guys screaming for me from your homes since we won’t have any spectators this year.”

Stage Two of the 2020 CrossFit Games goes down next weekend, October 23rd-25th, in Aromas, California. Kari Pearce will be looking to be crowned the Fittest Woman on Earth, as she puts her skills to the test in a big way.

The Cable Side Bend Exercise Guide and Videos