The kettlebell thruster is an amazing total-body exercise that builds muscle and strength but it's functional carryover is one of the primary reasons you should include it in your training repertoire. In this guide, you'll learn about the muscles worked, how to do it correctly, variations, and more. 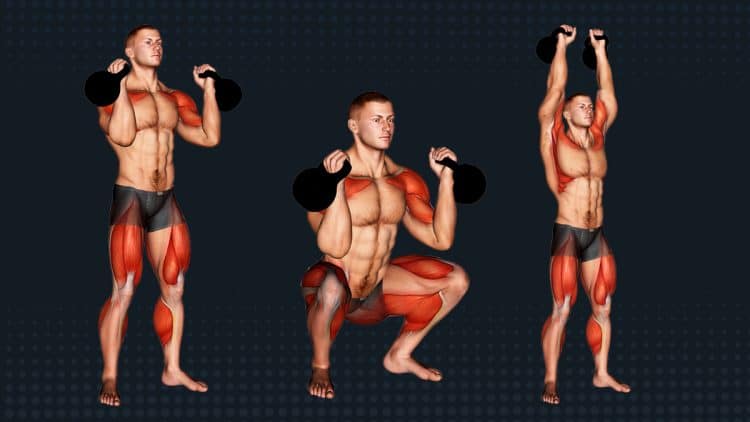 When it comes to functional exercises that make you a better athlete or more well-rounded in your fitness, the kettlebell thruster seems to check all the boxes. Not only can you load it heavy for muscle and strength gains, but it’s one of the best movements anyone can do to develop and improve total-body stabilization.

The core muscles and shoulders have to work overtime to not only balance but press the awkward implement that is a kettlebell, overhead.

This is good for so many reasons and also so many different individuals from athletes to serious gym-goers, beginner exercisers, or someone who simply desires longevity and who wants to maintain their physical health.

In this guide, you’ll learn all about the kettlebell thruster and how you can benefit from this great exercise.

The kettlebell thruster works several muscle groups and we’ve included brief descriptions of each one. 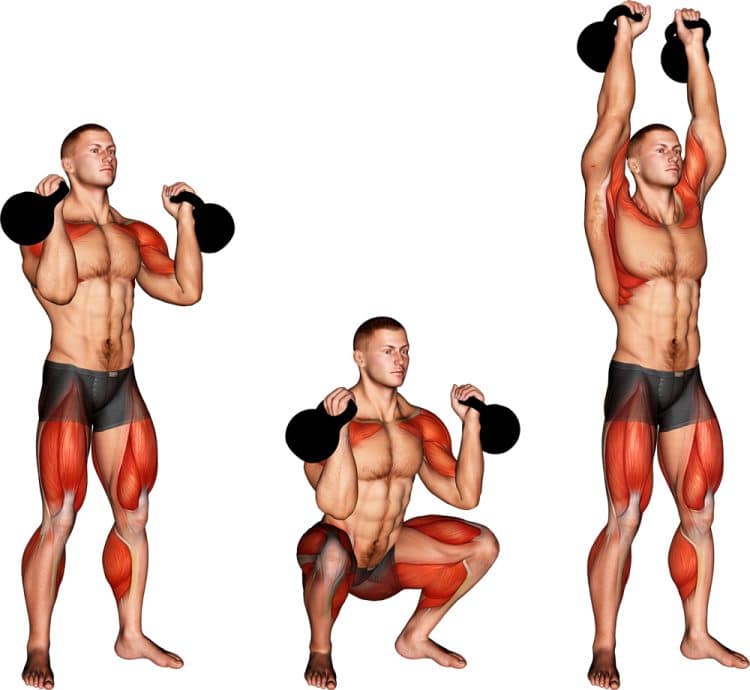 Kettlebell thrusters largely activate the gluteus maximus butt muscles through extension of the thigh (standing up out of a low squat position). Maximus is the largest and strongest of the glute muscles. Try to focus on driving your feet hard into the ground to maximize their stimulation.

If you want to train the large five headed quadriceps muscles, squats are one of if not the best way to accomplishment that. If you look at how a squat is performed, there’s hip flexion and knee extension which is the primary job of the quads muscles.

The hamstrings are a group of three muscles – semitendinosus, semimembranosus, and biceps femoris – found above where the knee bends and below the hips on the posterior part of the thigh or upper leg.

When you bend your knees (squat or leg curl) and extend your hips (standing straight up from knee bent), it’s the anatomical function of the hamstrings that allow us to complete these movements.

If you’re an athlete, training the hamstrings through squats will make you stronger and more explosive.

The deltoid or shoulder muscles are formed with three heads – anterior, lateral, and posterior. Each does something different as it pertains to moving the arms. Let’s take a look at the function of each one.

Anterior – On the front side of the torso, the anterior deltoids lift the arm up and forward into an action called flexion.

Lateral – The outermost head of the shoulder muscles, deltoids lateral abducts the arm up and out laterally to the body between 15 and 100 degrees. Keeping the elbows wider during an overhead press will activate more of the deltoids lateral.

Posterior – Or the rear delts, the posterior shoulders will get some stimulation during a press. However, not to the same degree as the anterior and lateral heads. You cannot see the posterior deltoids unless you view them through the use of two mirrors. Consequently, they can become neglected or forgotten altogether.

Kettlebell thrusters are a good all around delts movement.

Same as the shoulder muscles, the triceps are composed of three heads (lateral, medial and long) as the name would suggest. And like the deltoids, your shoulders assist in movement of the arm, but primarily elbow extension (pushing the kettlebells overhead) and extension of the arm behind the body.

Any time you perform a squat, know that your core muscles are doing a lot of work to stabilize your trunk and ensure you can successfully complete the task. Everything from the abdominals (stabilizes spine) to the obliques (trunk rotation) and back extensors will kick in during kettlebell thrusters.

How To Do The Kettlebell Thruster

The kettlebell thruster is not the most complex movement, however, it’s not the simplest either. Unlike a bodyweight squat or push-up for example, this exercise is more involved and therefore requires more focus. We’ve included step-by-step instructions to ensure you have the best possible outcome and prevent injuries.

Step 1: Power clean or swing clean the kettlebell into the front rack position. The arm should be close to the body with the forearm vertical.

To do the power clean,

Step 2: Keep the core tight, chest up and back strength.

Step 3: Squat down until the upper legs are slightly below parallel to the ground.

Step 4: Explode back up by driving through the midfoot, and press the kettlebell directly overhead, ensuring that the arm is perpendicular to the floor and not out in front of you as explained in the video below. Your body should form a straight line after the press.

Step 5: Lower the kettlebell to the front rack position, lower into the squat and repeat.

Kettlebell Thruster Tips/What Not To Do

This unilateral exercise has many great benefits which is why we recommend it all day for functional fitness and strength.

Because of how kettlebells are designed, they are one of the best functional training tools. The kettlebell thruster requires shoulder stability and strength to press it overhead in the proper position.

Holding a heavy kettlebell and performing a compound, multi-movement exercise will require an incredible amount of total body stabilization. This transfers over to sports, heavy lifting activities, preventing injuries and more.

Unilateral training has many benefits in itself. When you train one side at a time, this helps to find and correct imbalances, trains you in a way that you’re likely to function during sports, improves core strength and stability, and is even recommended for injuries.

According to research, unilateral movements

The core muscles will get one heck of a workout from this movement, especially if you’re using enough weight. The muscles of the midsection play a massive role in stabilization and ensuring the body is strong and rigid to support challenging tasks such as squatting while holding a single kettlebell in front of you and then pressing it overhead.

Full-body compound exercises are not just excellent for building strength. They also build up cardio fitness and stamina, and burn more fat compared to isolation movement. Not to mention, the kettlebell thruster involves a few different components which has an even greater effect.

No exercise is perfect but it’s hard to find much bad about the kettlebell thruster. We’ve included a few drawbacks that you should know about, however, don’t let them deter you from trying this movement and making it a regular in your functional training sessions.

So if you haven’t noticed, the kettlebell thruster isn’t the simplest movement. But then again, beginners should not be using heavy weight.

You need mobility to get into a squat position, stability to maintain proper body position and balance especially at the end of the movement when the kettlebell is pressed overhead. Not everyone is ready for this exercise and some may have to look for other options.

The exercise also requires some stamina especially to get anything beneficial from it.

The single arm kettlebell thruster is one of the best movements anyone can include in their fitness program. However, we also really like these variations that have their own unique benefits.

This variation involves performing the thruster using two kettlebells. You’ll still benefit from the stability, balance, and strength components of this exercise especially since you can usually handle more weight. But handling a weight in each hand at the same time also has tremendous positive effects on development and performance.

It’s great for identifying left and right side imbalances, has carryover to barbell lifts using a similar movement pattern, plus it builds strength and endurance.

The goblet squat is a fantastic exercise that primarily trains the leg muscles. It’s also great for reinforcing good lifting posture and teaches the squat without a bar on your back. Combining the goblet with the thruster is a great idea as you can take advantage of what both have to offer.

To do this exercise, perform the goblet squat and press the kettlebell overhead.

No kettlebell? No problem. Use a dumbbell instead. For this exercise you’ll bring the dumbbell to either shoulder and perform the exercise exactly the same.

If you’re ready for the big time stuff, we recommend the barbell thruster. It’s superior for building strength and a must-have for sports performance and CrossFit style training.

How To Include The Kettlebell Thruster Into Your Workout Program

The kettlebell thruster suits a more functional fitness or CrossFit workout style. Although it can certainly be incorporated into any regime. Here are a few ways to add this exercise to your pre-existing regime.

CrossFit may be responsible for popularizing kettlebells and they’re used in a lot of the workouts including complexes.

Complexes are several exercises performed back to back with no rest in between using the same exercise tool (kettlebell in this case) and the movements are strategically organized to flow seamlessly from one to the next.

We don’t see why the thruster wouldn’t be great for supersets, which is a training method where you perform two exercises back to back with no rest in between.

Circuit training is not the same as complexes. Rather, you perform several exercises back to back with no rest in between but the movements are usually different and do not have to use the same training tool.

The Kettlebell Thruster Has Many Benefits That Make It Worth Doing

We really like the kettlebell thruster and its variations for many reasons. Everyone should be including functional strength exercises in their workouts whether they are athletes or not.

It’s an excellent option for core strength, total-body and shoulder stability and strength, fat burning, conditioning and more. Not to mention, there are many fun ways to incorporate it into your workouts for results and to spice up your routine a little.

Also be sure to check out our other kettlebell training related content.