The kettlebell Turkish Get Up (squat style) is a total-body functional exercise that offers many benefits. In this guide, we'll discuss the muscles worked, how to do it, tips for best results, benefits, and how to include it in your training program 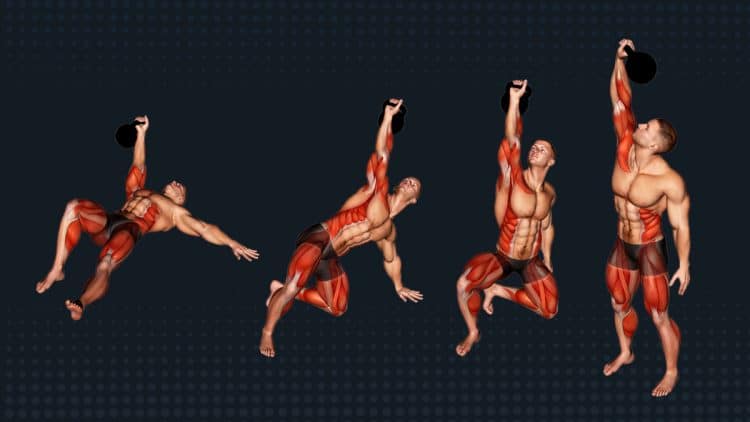 Kettlebell Turkish Get Up

The kettlebell Turkish get up is a functional exercise that requires and improves total-body stability. It also works most muscles of the body as you’re starting from a lying down position and ending standing on your feet. You need strength, coordination, total body stability, flexibility, mobility, and positional awareness to complete this movement. We consider this one of the best techniques to learn for all-around fitness.

The kettlebell Turkish get up is pretty much a total body movement. We’ve included brief descriptions of the muscles involved.

The butt is more than one muscle, the gluteus maximus, medius and minimus. The maximus is our largest muscle and it forms most of the butt and hips shape. It’s role in the human anatomy is to extend and externally rotate the thigh. Think when you need to stand up from sitting or climb a flight of stairs.

The quadriceps is large because it has four muscles that cover the front of the thigh – rectus femoris, vastus lateralis, vastus medialis, and vastus intermedialis. It’s also one of the strongest muscles. The quads are activated when dropping down into a squat and standing back up.

The kettlebell Turkish get up squat style primarily targets the quads and other leg muscles.

The Turkish get up is a full lower body exercise, also working the muscles that sit on the other side of the quadriceps on the back portion of the thighs also known as the hamstrings. They’ll counteract the role of your quads by extending the hips and flexing the knees.

You need core strength to do kettlebell get ups but they’ll also make you stronger in that area as well. Everything from the six pack muscles to the deeper transverse abdominis, obliques and spinal erectors are engaged to get you from a lying to standing position while balancing a kettlebell overhead.

The kettlebell Turkish get up is a killer shoulder workout requiring the deltoids to hold and stabilize the weight overhead.

This isn’t a simple exercise like a biceps curl or even a basic squat. There are many more elements involved as you start from your back and end up on your feet. We’ve included step-by-step instructions to help you understand how to properly execute this technique.

Before you start training, it’s important to find a proper weight. This will be easier to do for more experienced exercisers. However, if you’re trying the kettlebell Turkish get up for the first time, grab a very light kettlebell to learn the movement before you use a more challenging weight.

Kettlebell Turkish get up tips/what not to do

Kettlebell Turkish Get Up Benefits

There are many benefits to be had by introducing this movement into your training regime.

Stability and flexibility are essential components of functionality and health. Without either you can forget about making progress, becoming well-rounded, and having longevity.

This is especially true for the shoulder joint that is an area often prone to injury and a lot of times that’s because it’s not as stable or strong compared to other joints in the body. Exposing the joint to strength-promoting movements carefully and with good form will make it stronger and more stable, and therefore enhance your training experience and prevent pain and injuries.

The Turkish get up and its variations closely replicate real life scenarios whether you play sports, have a career that requires you to get down and dirty and have to do daily tasks.

As we get older, it tends to become harder to be as functionally strong and capable. It’s best to maintain this for as long as you can and that means you should be performing similar movements regularly. Keeping up with and even improving motor skills is a vital component of well-being.

A lot of us would be surprised just how incapable we really are when it comes to performing such complex movements. The kettlebell Turkish get up (squat style) is not only something most of us should try but it’s fun to challenge others with these types of functional exercises too.

Try these Barbell, Dumbbell, and Kettlebell Complexes to Get Ripped Fast.

Kettlebell Turkish Get Up Drawback/s

There aren’t many drawbacks, however, we should mention the possible cons of the kettlebell Turkish get up (squat style).

You need to have a decent level of fitness

If you lack mobility, flexibility, coordination, and shoulder stability, then this exercise could be hard or impossible to do. It does require at least a decent level of fitness and there are many different elements involved. With that being said, most people can work up to it and practice partial movements or not use any weight to progress into the Turkish get up and its kettlebell variations.

Kettlebell Turkish Get Up Variations

Here are a few variations that you can try for some variety.

Why do we love this exercise? Because it’s so beneficial overall. Before you do the Turkish get up and its variations, this is a good place to start because it requires a similar technique but is done from a standing rather than lying position.

Learn how to do it and more here.

Learn more about it and how to do it with our full Turkish get up guide.

The order in which you include this technique isn’t as important as just taking some time to throw it into your routine. Although, you don’t want to carelessly throw it in as this could cause injuries. But rather, take the time to practice and perfect it.

You can do it alongside any workout program or as part of a specialized functional training regime.

It would make a great addition to kettlebell only workouts, and if you train to be more athletic and stronger from the ground, this is something you should be doing.

No Frills Fitness: One Kettlebell and Bodyweight Full-Body Workout

As for sets and reps, well this depends on the person and their goals.

At a minimum, we recommend doing at least one set of a few reps. Use a light kettlebell and make sure you are doing the exercise properly. Then, when you’re confident, you can ramp it up to 2-3 sets and use a more challenging kettlebell.

The reps aren’t as important although you do not want to go too light or heavy either.

Determine the appropriate number of reps based on what you want to achieve.

It’s time to get up with the kettlebell Turkish get up (squat style). It’s one of the best functional movements you can do including all of its variations and it’s definitely worth learning.

Whether you’re an athlete or seek longevity and a long-lasting functional body, it’s important that you do things that require the entire body to work together to achieve a specific outcome and this is a technique we’d recommend.

How To Do Single Arm Push Up – Tips, Benefits, Variations and Alternatives, Programming