The kettlebell windmill is a unique movement that strengthens various muscles and increases stability and flexibility. The benefits are worth including it in your workout regime. In this guide, we'll explain muscles worked, how to do it for best results, what the benefits are, and more. 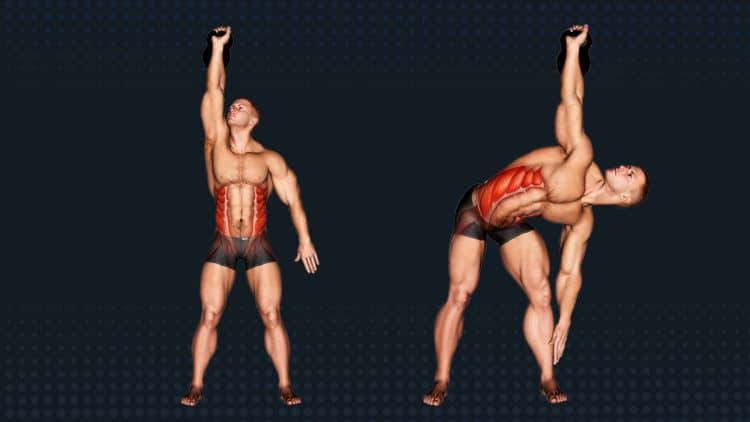 It’s not your conventional strength-building exercise, however, movements such as the kettlebell windmill help to enhance many factors of your performance. It’s important to also focus on these types of exercises because they have total-body stabilization and flexibility benefits while also contributing to certain aspects of strength in upper and lower body muscles.

The kettlebell windmill technique builds strength and enhances the function of the shoulders, core muscles, and especially the obliques, glutes, hamstrings, and hips.

Doing this activity will have carryover to your other weight training movements, athletic activities, and is good for maintaining total-body health and fitness.

In this guide, we’ve explained how to do it correctly with tips, talked about the benefits you can expect and we included some variations and alternatives.

The kettlebell windmill works several muscle groups at once and below we’ve included brief descriptions of each body part involved. 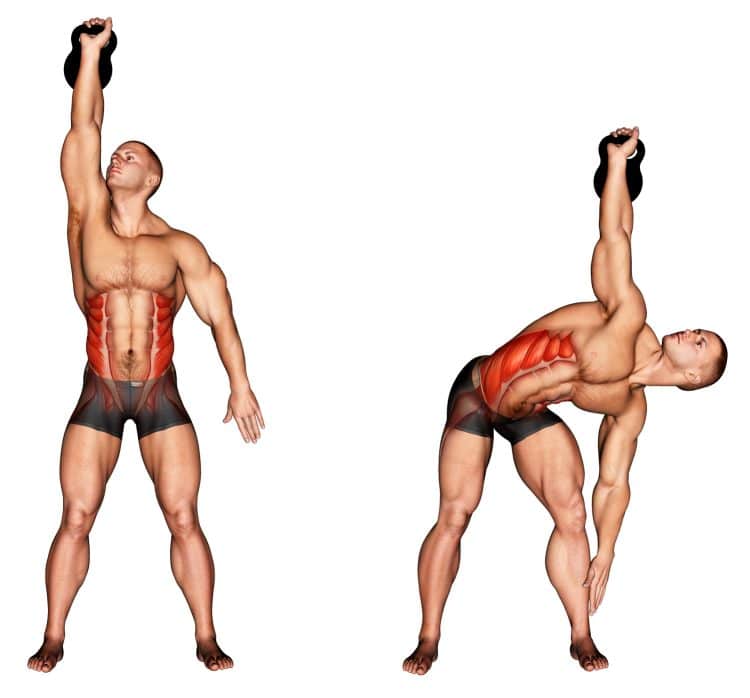 The iliopsoas is the primary hip flexor; made up of the major and minor psoas muscles and the iliacus muscle. It can function as a unit or separately to stabilize and facilitate movement. These muscles are important for proper standing and posture, the coxofemoral joint, and walking and running.

The iliopsoas is very much involved in every part of the hanging straight leg raise, especially when lifting the legs upward.

Strong hip flexors are crucial for just about any total body activity.

The obliques are core muscles located on either side of the abdominals. The primary function of these muscles is to rotate or twist the torso, which is one aspect of performing the kettlebell windmill.

The tensor fascia latae (TFL) is a thigh muscle that works with several muscles to assist in the movement and stabilization of the hip and the knee. Along with the gluteus medius and gluteus minimus, the TFL internally rotates and abducts the hip. It also works with the gluteus maximus to abduct the hip via the iliotibial (IT) band.

The TFL also assists the rectus femoris in the flexion of the hip, and assists in pelvis stability while standing and walking.

The deltoid or shoulder muscles consist of three heads – anterior (front), lateral (side) and posterior (rear).

When contracted, all three heads help to facilitate abduction (arm moves away from the midline of the body) of the arm past 15 degrees although they cannot initiate this motion due to their anatomy. The anterior and posterior heads stabilize the arm while the lateral head lifts the arm up from 15-100 degrees.

The shoulders along with the rotator cuff are responsible for movement of the arm in front (flexion), above and behind the body (extension).

These muscles also compensate for lost arm strength like due to a rotator cuff tear for example, and the delts prevent dislocation of the glenohumeral joint such as when the arm is adducted and carrying weight (e.g., deadlift, groceries, etc).

The butt is composed of a few different muscles such as the gluteus maximus, gluteus medius, and gluteus minimus.

The gluteus maximus forms most of the superficial appearance of the butt and hips and is a very important muscle for function and aesthetics. The jump squat engages this muscle primarily compared to the other glute muscles.

The butt primarily extends and externally rotates the thighs and it plays an important role in helping us to maintain an upright posture.

How To Do The Kettlebell Windmill

The kettlebell windmill is one of the more complex exercises but primarily because it requires decent flexibility and coordination. Here are step-by-step instructions to ensure you get the best results from performing this movement.

There are a few key benefits to doing the kettlebell windmill.

One of the primary benefits of the kettlebell windmill is that it requires thoracic rotation which is great for improving upper back flexibility. A lot of us neglect these types of exercises that involve moving your body in ways that we’re not used to but it’s beneficial to everyday movement and function.

Everyone should include hip hinge movements in their workout routine because hip strength and movement is crucial for so many things. From performing compound lower body exercises such as deadlifts and bent-over rows, to picking up things around the house and participating in athletic activities, you need to be strong in this area.

The shoulders are involved in pretty much every upper body movement both in the gym and out and are also a common area for injury. Training shoulder stability is a good idea for many reasons but especially to maintain the health of this ball and socket joint.

Also read: Get Bigger Shoulders Without Wrecking Your Joints

This is a challenging core exercise that primarily recruits the oblique muscles through rotation but under resistance. Every part of the movement activates these muscles.

This isn’t something you’ll often see people doing at your gym and chances are you’ve never done it before. It’s much different than doing the common exercises but offers some great benefits that will help you to be better at the aforementioned movements.

There aren’t many drawbacks to this exercise however we should point any out for those looking to try it.

You should be comfortable with using a kettlebell

Before doing this exercise, we recommend you have a little experience training with a kettlebell. It can feel awkward to its design especially if handling more than light weight, although we do suggest starting out light if you’ve never performed a similar movement.

Fortunately for you, we have lots of excellent content on kettlebell training so you can learn how to safely and effectively use this beneficial training tool.

This exercise is most certainly not for everyone. For one it’s a little more complex than common exercise and secondly, it does require you to have some flexibility, mobility, and coordination.

Related: How and Why To Do The Windmill Exercise.

The kettlebell windmill is an excellent exercise that we recommend including in your workouts. However, we also really like these variations that offer unique benefits as well.

If you don’t have a kettlebell you could use a dumbbell instead. Oftentimes a dumbbell is more accessible so there’s no reason to not benefit from this beneficial exercise.

The Turkish get-up is an intimidation exercise because you really do have to be well-rounded to do it. It’s a complex, total-body movement that involves starting from a lying position on the floor and ending in a standing position while balancing a kettlebell overhead.

This variation also works a lot of the same muscles and compared to the kettlebell windmill, and it’s amazing for developing full-body coordination and stability.

Learn how to master the Turkish Get Up here.

If you’re doing various kettlebell exercise variations, simply using a squared stance rather than turning your feet 45 degrees in either direction can make these transitions and exercise combos much easier.

You’ll simply stand with feet just slightly turned outward as you would if performing kettlebell swings. From here you can do snatch the kettlebell above your head and drop down using one fluid movement.

We love this one because you perform the windmill but also a biceps curl and therefore requires the use of two kettlebells. It’s definitely a more advanced exercise.

How To Program The Kettlebell Windmill Into Your Training Routine

This will depend on your goals, although it’s good to use a variety of training approaches.

But one of the best ways to program the kettlebell windmill is to do it at the end of a workout as a finisher to take advantage of its functional benefits. This way you get the compounds out of the way and then you can focus on your technique on this movement. It’s a great accessory movement to help improve your other lifts and is also good for doing supersets where you perform two exercises back to back with no rest in between.

We’ve included the ideal sets and reps based on your goals.

Low reps and heavier weights are best for building strength. Take a 2-3 rest in between to maximize your performance.

To focus on muscle mass, stick to moderate reps with medium to heavier resistance. Rest 60-90 seconds between sets.

This is best for athletes who play sports and CrossFit type training as it trains muscular endurance. Rest 60-90 seconds in between sets.

The kettlebell windmill is a great functional exercise that has many benefits and we recommend programming it into your training regime to enhance your overall fitness and workout performance. It’s a convenient exercise that targets specific areas often neglected and there are variations to make you even more well-rounded.

Chris Hemsworth is one of Hollywood's busiest actors, though his passion for exercise has also elevated his name in the...

Marvel superstar Chris Hemsworth is widely recognized for having one of the most impressive physiques in Hollywood. In a recent...