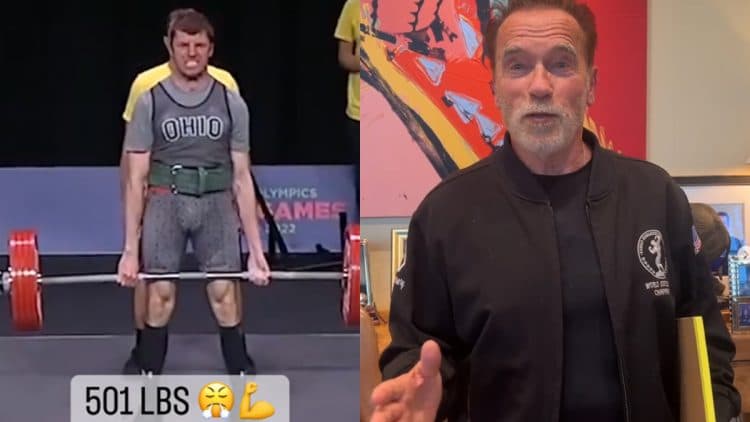 The 2022 Special Olympics USA Games are taking place from June 5-10, 2022, in Orlando, FL. The five-day competition enables athletes with some disabilities to compete at the highest level and reap the benefits of all their hard work. As such, it features some very brilliant performances, which impress everyone, even bodybuilding legend Arnold Schwarzenegger.

Arnold Schwarzenegger doesn’t hesitate to praise anyone who deserves it, and this time it was Special Olympics competitor Kevin Cantrell. Kevin’s specialty is lifting massive weights, so he found his enjoyment in powerlifting. This is where Kevin displayed a mind-blowing feat of strength, as he deadlifted 501 pounds (227.5 kilograms).

Kevin Cantrell competed in the 93-kilogram weight class, but weighed in at a lot less. His bodyweight at the time of the 501-pound deadlift was 188 pounds (85.28 kilograms). Kevin’s deadlift was also raw, as he only used a lifting belt. His style of lifting utilized a conventional stance and a mixed grip.

Arnold Schwarzenegger shared the video of Kevin Cantrell joining the 500 pounds deadlift club on his official Instagram. He also praised Kevin in the caption of the post.

You Can watch the lift here:

“You inspire me, Kevin!”

Kevin Cantrell represented Ohio at the 2022 Special Olympics USA Games by competing in a push-pull format. This means that he only took part in the bench press and deadlift events.

Schwarzenegger has been involved with the Special Olympics and its athletes for a number of years now, and this isn’t the first time he’s recognized them. Arnold In 2017, received praise for defending the contest and athletes from a person attacking them on social media.

A few haters came out in response to Arnold Schwarzenegger’s photos with competitors that he shared on Facebook. Arnold took action and taught one of those people a lesson. The commenter wrote that the Special Olympics should not exist, and some more vile stuff which we will not mention. Arnold replied,

“Arnold Schwarzenegger As stupid and evil as this comment is, I’m not going to delete it or ban you (yet) because it’s a teachable moment. You have two possible paths ahead. Right now, I guarantee you that these athletes have more courage, compassion, brains, skill – actually more of every positive human quality than you. So take their path – you could learn from them, and try to challenge yourself, to give back, to add something from the world. Or you can stay on your path, and keep being a sad, pitiful, jealous internet troll who adds nothing to the world but mocks anyone who does out of small-minded jealousy. I know what you really want is attention, so let me be clear. If you choose to keep going this way, no one will ever remember you.”

Arnold Schwarzenegger has once again demonstrated what an incredible individual he is. He does not hold back on sharing anyone’s success, but on the other hand, Kevin Cantrell deserved it. His 501-pound (227.5-kilogram) deadlift is one for the history books, and this praise from the Terminator himself will only fuel his desire.