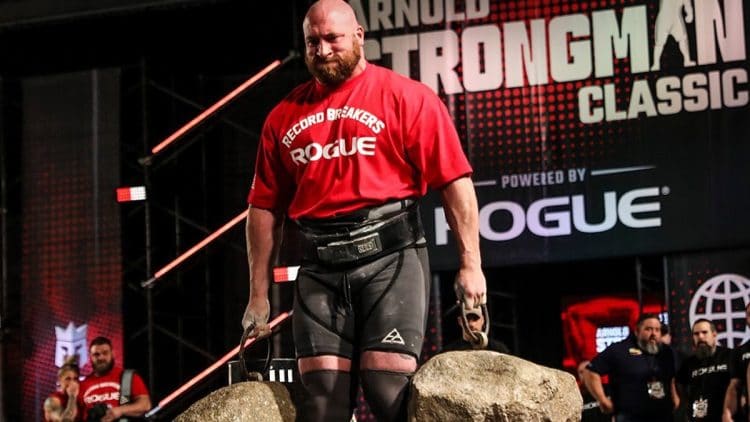 The 2022 Rogue Record Breakers event took place on March 5-6, at Arnold’s Sports Festival in Columbus, Ohio. This was the first time that we got to see the Iconic Dinnie Stones in a competition. Many strongmen tested themselves, but it was Kevin Faires who would set a new record, as he carried the stones for 25 feet 8 inches (7.8 meters).

No one expected Kevin to carry the weight for such a long distance. This includes the organizers of the event. However, Kevin surprised everyone and even walked beyond the end of the measuring tape. He was the first athlete to attempt the event, but no one would keep up with him, and the record remained in his possession.

This is the first time that Dinnie stones have been implemented into a competition, and replicas had to be used. Kevin broke the record which was previously held by Laurence “Big Loz” Shahlaei. Big Loz set the previous World Record by walking 14 feet 10 inches (4.52 meters) with the stones.

To most people, the Dinnie stones look like just some random boulders, but they are 200-years-old and hold serious history behind them. The stones were originally used as counterweights during the maintenance of the nearby Potarch Bridge.

However, in 1860 there came a man called Donald Dinnie, who would allegedly carry the stones for the length of a bridge. As time passed, not many people could lift the stones, and it became a goal for many Strongman athletes to complete them. Furthermore, the stones are not equal in weight, which makes it more awkward to balance it out and carry them.

Kevin Faires is a very experienced strongman, as he took part in 14 open international competitions. He has yet to register his first international win, but has dazzled the strongman community multiple times with some amazing performances. However, Kevin got 2 international wins in the U105 kg weight class.

Kevin is 32-years-old, and his first competition was the 2016 U105 Strongman World Championships. He took part in 3 World’s Strongest Man competitions, having his highest placement in 2020 when he finished 7th. Furthermore, that competition displayed his incredible grip strength, as he placed second in the Hercules Hold event.

We had the chance to see Kevin’s unbelievable grip multiple times. The most notable display was when he broke the Nicol Stones World Record, having carried them for 22.2 meters at the 2021 Giants Live World Tour Finals.

Kevin Faires’ new Dinnie Stone Walk record is very impressive, and it is hard to imagine the record being broken again. Kevin absolutely demolished the previous records, and once again showed why he is considered one of the strongest people on earth.