Luke Richardson was set to compete at 2022 Europe's Strongest Man, but it is unknown how long the recovery will be. 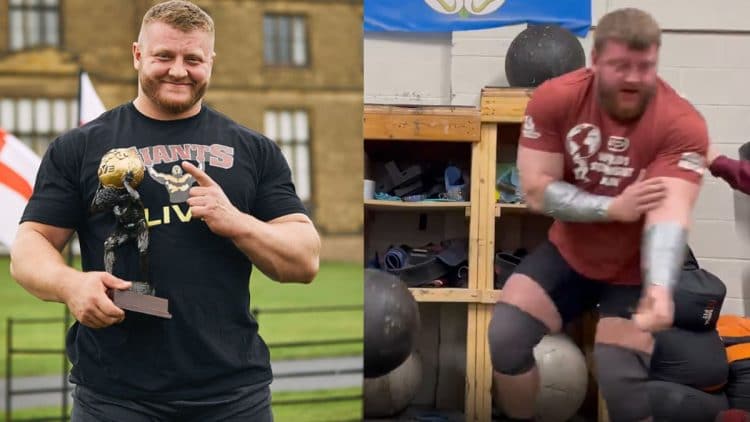 The 2020 Europe’s Strongest Man, Luke Richardson, is going through a rough period of his career. He withdrew from the 2021 World’s Strongest Man competition, due to the same injury. Luke tore his biceps at the first event, which was the loading medley. He has since recovered, but during a training practice on Friday, February 25th, 2022, Luke re-ruptured the same biceps on his left arm.

Luke posted a video on his official Instagram, which sees him doing atlas stones. The first stone went up with ease, and the second one looked to go the same way. However, just before he finished the second rep, Luke let go of the stone and immediately realized the severity of the injury. Luke seemed more in shock and disbelief than he was in pain. The most interesting thing is that the bicep tear can even be heard in the video.

“On Friday, I re-ruptured my bicep. I don’t often feel sorry for myself, I just accept things and get on with it. But after allowing plenty of time to recover and to be rehabbed properly, it’s a bitter pill to swallow.”

Luke is only 24-years-old and has accomplished a lot in his still-young career. He placed 9th at the 2020 WSM and tried to improve that in 2021, but his bicep injury stopped him. Now, after suffering the same injury again, Luke will have to take great care of it. This time he will go to a private doctor, who has a history of helping strongman athletes with injuries.

However, the strongman community gathered to help him with his recovery. The key man for that is his fellow injured Strongman, Graham Hicks, who set up a GoFundMe for Luke’s surgery. Graham explained that in order to have the surgery with the best doctors, he would need around $6,700.

In only one night, the fundraiser collected $8,700, and the spare money will be used for Luke’s rehab and therapy after surgery. He is now scheduled for consultations on March 2nd, 2022, and will visit a surgeon who operated on Graham Hicks and Adam Bishop.

“The shown support has been something that I would never expect. Obviously with it being a relatively s**t year for me, with setback after setback, and financial worries with surgeries and not making prize money… It has been very perspective altering to see how willing people are to support and help me.”

A biceps tear requires an extremely long recovery, and Luke now has to go through it for the second time with less than one year between injuries. Luke was supposed to compete at 2022 Europe’s Strongest Man, but this injury could ruin his whole season. It was also great to see the entire community coming together and helping Luke as much as possible.