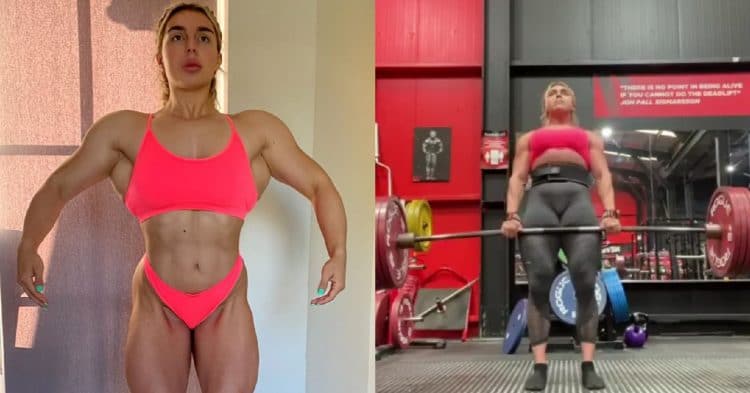 As the youngest IFBB Pro in Europe, Kiera Aston is known for his massive muscles. However she proved that these muscles are not just there for show, with a pretty solid deadlift session recently.

At just 21 years old, Jaston is making quite an impression in the bodybuilding world, with her efforts in the Figure division. She has built a reputation for her lean but shredded physique, and captured the attention of fans for her quick and drastic physique transformation. As a result, she is being looked at as someone to pay attention to moving forward, as her career develops.

Knowing that there is a ton of pressure on her shoulders, Kiera Aston has been working hard to live up to these expectations. A recent post to her Instagram gave a glimpse into the back day training she is doing, putting a focus on deadlifts. This session saw her going five reps on a 485lb (220kg) pull, followed by five more reps with 463lb (210kg), looking stellar the whole way.

“Back Day🔥
I train back twice a week and on one of those back days I start off with dead’s. Worked up to 220kg x 5 followed by 210kg x 5 for my working sets today and pretty happy with how they’re moving considering we’re now on a bodybuidling prep 😅🙌🏼 The rest of the session consisted of heavy pendlay rows (8-10 rep range), lat pull down (8-10 rep range) and some bicep work. Short and Sweet, you don’t need a million exercises to grow your back you just need the right ones.”

Both of these sets seemed effortless from Kiera, as she smoothly pulled all five reps of each. This was not the biggest weight, but for her size it was a solid session. Not to mention, she seemed more focused on her form and cranking out reps, rather than pulling heavy.

Jaston has been working hard on her back lately, and not just with deadlifts. Just a few days before this session, she was doing some pull-ups and pulldowns. It gives a great look at how developed and toned her back is starting to look.

Thing seem to be really coming together for the young Kiera Aston. With her progression being what it is, and how young she is, it does seem like she is going to be something special in Figure competition. She is clearly extremely talented, and is also putting in the work to be successful.

4 Gauge Pre-Workout Review – Does It Have The Firepower?