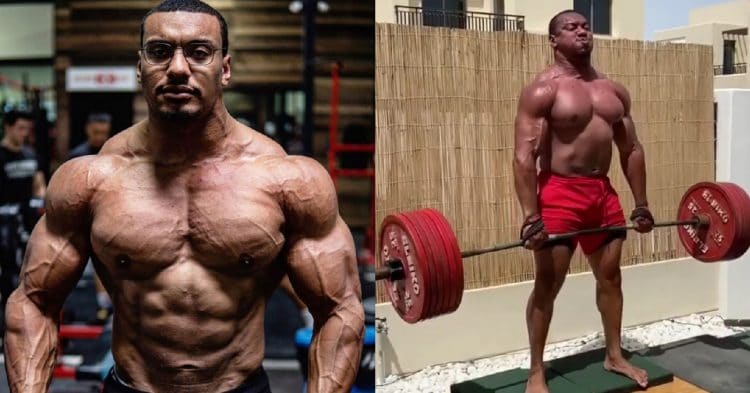 Larry Wheels has been taking some time off from heavy training. However he recently showed that he has not missed a beat, with a massive deadlift in his return.

Being known as the PR machine means that Wheels is always expected to do crazy things in the gym. Therefore with things being a little more complicated in the world, it has been more difficult to get traditional workouts in. Nevertheless he found some rather unique ways to keep training.

Now it seems that Larry Wheels is back to his regularly scheduled training program. He took to his YouTube channel, to give a glimpse into the deadlift training he has been doing. He starts off the video by explaining that he plans to do As Many Reps As Possible of a 705lb (320kg) deadlift.

Wheels starts off with a 375lb set to warm up, hitting it for one quick rep. He explains that he and his friends are doing these deadlifts on a deficit of about an inch and a half. He says this provides a bit of a difference.

“Absolutely (it makes a difference). Off the floor it’s harder, I want to say maybe 10% harder. You add a deficit in when you want to increase your floor speed.”

Larry Wheels moves onto a final warm-up of 485lb, before setting up his AMRAP set of the 705lb deadlift.

Wheels goes for four strong reps of the 705lb pull. You can tell that he considers trying a fifth rep. However he ultimately decided against it, choosing to listen to his body instead.

There is something to be said about how good Larry Wheels looks, even though he has taken this time off. You can watch the full video below, and see all the action in his first real training session in a while. He looks solid so far, but it is safe to assume he will only get better as he gets back to his regular schedule.

18 Best Upper Chest Exercises and Workouts To Build Your Pecs