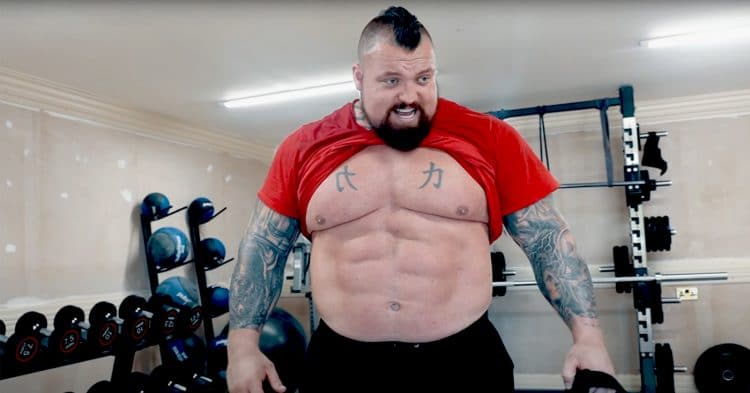 As you probably know, Hafthor Bjornsson broke Eddie Hall’s deadlift world record (500kg/1102lbs) with 501kg/1105lbs) a few weeks back in his gym as part of WUS Feats of Strength series. So Bjornsson called out Hall for that boxing match they had talked about a while back and after the latter accepted, the date was confirmed for September 2021 shortly thereafter.

And there’s so much bad blood between the two that we don’t expect either to hold back when the time comes. Bjornsson already lost 40 lbs to condition himself for the big bout and Hall has lost 20 lbs while showing off his boxing skills too.

But Eddie Hall is back with another training session/update where he did a back workout. In the video, he explained that the last few sessions involved a lot of explosive power training that would carry over into boxing (we wonder if his explosive fart warmup at the beginning of the video was part of his training as well).

Well, this routine would be no different as stiff-legged deadlifts, lat, rhomboid, and oblique work would be the focus in this session. Hall explained that he thinks it’s still important to maintain mass and increase strength for the matchup to maximize punching power.

So he started off with stiff-legged deadlifts and explained that he’s not going to go too heavy as he hasn’t really done this deadlift variation. But he worked his way up to 110kg/242lbs on this exercise. It sounds a lot for this specific version of the deadlift but we’re talking about the former all-time deadlift world holder.

Next up was some upper back training. “A big strong back equals a lot more power in the punches as well,” said Hall. But before he could get down to business, he had to chase his cat who ran near the gate outside.

Then when he was ready to train again, he performed 4 sets x 8-10 reps of single-arm dumbbell rows going up to 50kg. But the way he did this exercise was a lot different than how it’s typically done. He got full extension during the negatives and then he pulled the dumbbell much higher than a typical row to replicate a punch.

In between, Hall talked about how he’s going to change his training setup and move his home gym equipment into a much bigger room as he just moved into a house. Although he already seems to have an attractive spacey setup as it is. So, it should be pretty cool to see what he has planned.

Nearing the end of the session, Hall did 4 sets x 10 of the straight-arm lat pushdown for lats and then he finished off with some explosive dumbbell side bends for 4 sets x 10 reps to train his obliques.

Hall explained that the session took three hours but he wasn’t quite done just yet. He’d have a big dinner, a nap, and then do some boxing drills on the heavy bag in the evening.

‘The Beast’ acknowledged that there isn’t much more else he can do as a result of the current global health situation.

“I can’t break the rules just because I’m a pro athlete or high-end celeb or whatever you want to say, it doesn’t mean I can go out and break the rules. So I’m abiding by it, I’m waiting for the government to release restrictions and then I’ll be sourcing a boxing coach pretty soon.”

“I’m feeling good feeling string that s for sure, bodyweight is coming down massively. I was 27.5 stone when I started when I came back from Australia. I anticipate to be 26.5 stone, maybe a little bit less.”

Hall says he’s at a good weight right now though and he’s able to do the boxing work well although he’s not sure what weight he’ll be for the fight just yet… “I could come in at 120 (kg), I could come in at 170 (kg)“. But he has to wait and see how things how he adapts to the training.

Because of the current situation, Hall explained that the boxing training has taken a little bit of a backseat. However, he’s still staying strong and improving his fitness.

As of now, both Hall and Bjornsson have a little over a year to train and prepare for their gigantic boxing matchup. It’s going to be an exciting (and likely drama-filled) lead up but we’re definitely looking forward to this one!

Check out the session below…