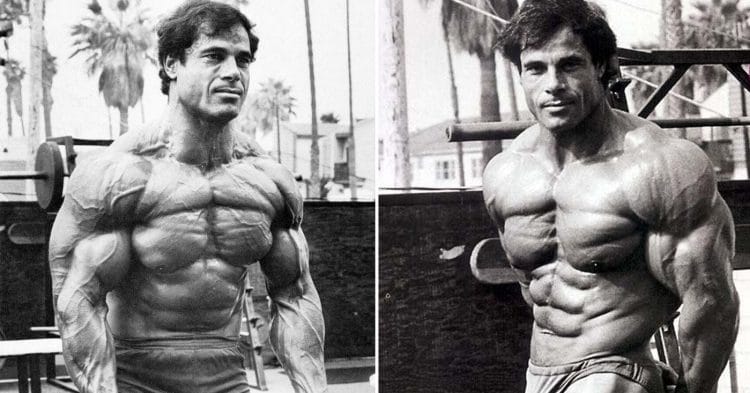 The upper chest is often an area that appears to be underdeveloped in many lifters compared to the rest of the chest. Now, you can’t isolate the upper pecs and not activate the rest of the muscle as that’s not possible. However, you can emphasize muscle recruitment near the clavicle area with key upper chest exercises and methods.

And anyone who trains knows how important it is to use different angles and techniques, especially for bigger muscle groups. Now, keep in mind that your genetics will determine how big and full your chest looks. But anyone (literally anyone) can make improvements and bring up weak points.

So you’ll want to keep reading because we have the best upper chest exercises with our explanations as to why you should do them so you can apply this knowledge to your own training.

Here’s a list of exercises that you should be doing if you’re not already.

It’s not just an alternative… in fact, the incline dumbbell press is preferred by many over the barbell version for a few reasons. 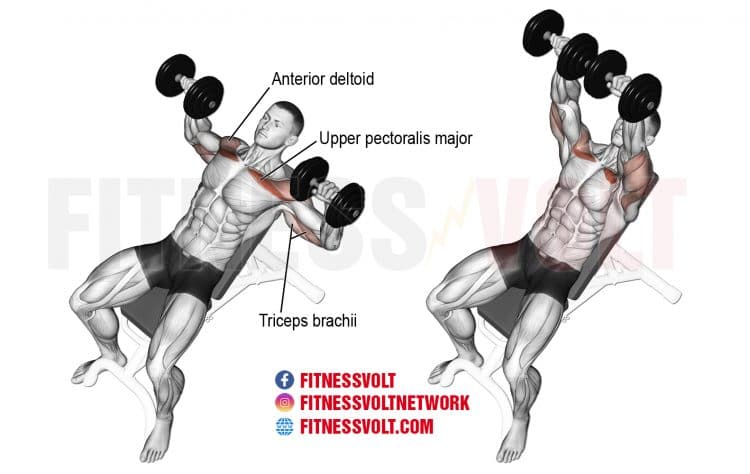 Using a barbell for the incline press can feel awkward and sometimes even painful for the shoulders. That’s because when you’re at an incline, the bar path is usually near the upper or mid-chest. And when your shoulders are locked in, there’s isn’t as much room for the shoulder joint to move around as comfortably.

So that’s why we like the incline dumbbell press. Your shoulders/arms have a freer range of movement, not to mention you can vary your hand position which can ease the stress placed on the shoulders even more.

Incline chest exercises already activate more of the front delts than do the flat and decline bench press variations. To maximize chest activation and reduce don’t felt dominance during incline presses, we recommend adjusting the bench to about a 30 degree angle.

This could also allow you to train heavier using dumbbells compared to a barbell while still maximizing chest engagement. Lastly, the adduction (bringing the arms toward the midline of the body) of the arms is an essential component of chest activation.

You can’t get that by using a barbell…

Related: How to build your upper chest without flys or presses

Again, because the upper chest area is typically more underdeveloped, it’s a good idea to try and get as much adduction of the arms as possible, for optimal muscle fiber activation.

But something many exercisers are unaware of is that the fibers of the upper chest run somewhat diagonally from the armpit up to the middle of the clavicle. Therefore, it’s smart to do exercise that allows you to follow the direction of the fibers.

Hence the reason why we’re proposing a low-to-high cable fly using one arm at a time for a maximum squeeze. You can also go heavy with this exercise but make sure to focus on the contraction of the muscles.

Bringing your arms low to high and across follows the fibers of the upper chest as shown in the video.

Pike pushups are the simplest way to work the upper chest using your own bodyweight. But make no mistake, it’s still a challenging exercise for most people.

Another advantage is that it’s a closed-chain movement. This means your hands are fixed to an immovable surface (the ground) which engages more stabilizer muscles and forces your shoulders to prevent your body from moving in all directions.

This is beneficial for overall upper body strength, stability, and performance.

To increase the difficulty of the pike pushup, elevate your feet up onto an object such as a box, chair, bench, etc.

Cables are great for keeping constant tension on a muscle but you can also cross your arms for even more chest contraction. You can’t do this with a barbell or dumbbells.

Not to mention, the fly/crossover increases strength in the pecs and associated muscles since the arms are more outstretched and less stable when compared to a press.

Each rep should involve crossing one arm over the other, alternating for each repetition.

You may have never heard of this movement before but it’s one we absolutely recommend. Not only will you really emphasize the upper chest but you can do it in a more explosive manner. So if you’re an athlete or someone who desires to develop more power using your arms in an elevated position, then this is for you.

There are several ways to do this exercise whether you use a hammer strength machine, a landmine setup, or even a suspended barbell racked.

Here’s an example although, you don’t have to press as explosively as what’s shown in the video…

Similar to the jammer press, the landmine press is also a very effective upper chest exercise. You’ll secure the end of a barbell to the corner of a wall or use a dedicated landmine setup made specifically for this exercise.

The landmine press is also a great way to build explosive function in addition to size and strength. Not to mention, you can fully take advantage of arm adduction for optimal contraction and muscle recruitment.

You can do this exercise using one or two arms.

Here’s a brief video with instructions…

While you’re already doing the landmine press, you might as well transition into the landmine rainbow which is similar to a chest fly. So instead of pressing the Barbell forward, you’ll start by holding the end of the barbell in a low position, and then you’ll pass the barbell back and forth from one hand to the other in an upward arching motion to follow the fibers of the upper chest.

It’s not a difficult variation to do and you’ll definitely hammer those upper pecs.

Note: This is not a rotation exercise. You want to pass the end of the barbell between hands while arching your arms to mimic the chest fly. Therefore, you should feel a good stretch in your pecs during the eccentric or negative portion of the exercise.

The resistance is felt when your arms move toward the midline of your body (adduction of the arms) before handing off the barbell to the other arm.

By doing these unique and extremely effective upper chest exercises, we don’t see how you couldn’t benefit from more size, strength, and overall development.

We literally hand-picked these movements to offer you the best options possible. Of course, these exercises aren’t the only ones you can or should do but each does have its own advantage. So, combine them and get pecs that pop!

Retired legend Dexter Jackson is one of the most successful bodybuilders to ever grace the stage, so it's safe to...

The Pectoral Split – Two Workouts Per Week for Perfect Pecs

Given how many exercisers want a big, muscular chest, you’d think they’d be more imaginative with their pec training. Instead,...

While we can’t prove it, push-ups are probably the most widely performed exercise in the world today. School kids to...