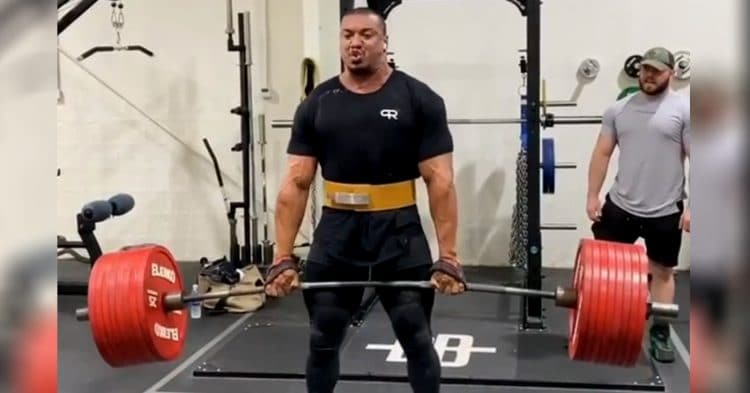 The king of completely shattering PRs is back at it again! This time Larry Wheels pushed his deadlift numbers to the next level with a strong pull in training.

If you have paid any attention to the career of Larry Wheels so far, you will know that he has no idea how to take it easy. This is the man who is constantly setting new personal records, and deadlifting so heavy that his pores bleed. Even when he is supposed to be taking things slowly he never ceases to overstep and try some outrageous lifts in the gym.

This crazy skill was back on display recently, as Larry Wheels took to his Instagram. Here he can be seen tearing the doors off of a huge 926lb deadlift, landing a new PR along the way. With a bodyweight of 285lb, this was a 26lb extension to his record.

“926lb/420kg deadlift PR! 26lb deadlift PR! 285 BW.
Belt was too tight and couldn’t get air in my diaphragm had tunnel vision and went for it anyways
Will attempt 426kg next week!”

This is a massive performance from Wheels, who is gunning for 426kg, which he says he will be attempting to do next week. This will be him looking to outdo a deadlift that he tried and failed to hit previously.  If it is to be believed that the main reason he struggled with this 420kg pull is due to a breathing error, then he should be able to deadlift 425kg fairly easily. He has been doing the work for it too, landing other PRs for his deadstop triple.

It is going to be fascinating to see if Larry Wheels can succeed at doing the 425kg deadlift he has set out for himself. It is not often that we see him fail a goal he has worked for. However he has failed this in the past, so it will be a great test to see how much he has improved.