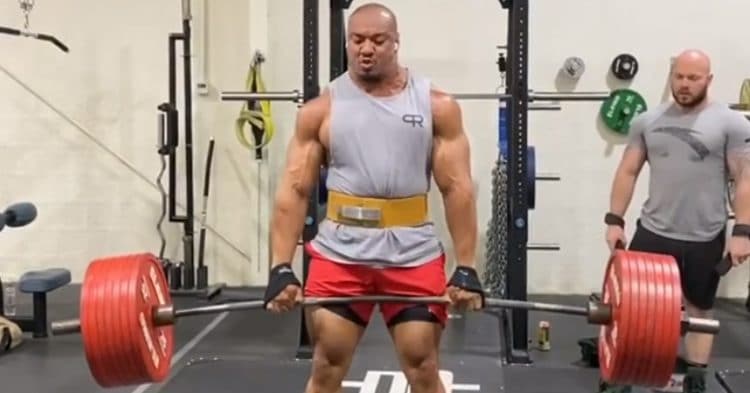 Larry Wheels has been crushing the deadlift training lately after having taken a little time off from lifting massive poundages. In early June, he hit a deficit deadlift pr with 705lbs for four reps. Then a few weeks later, Wheels smoked a 760lb deadlift for 5 reps. A few days later he gushed blood out of his head after a 793lb deadlift triple.

And most recently, he hit a new pr after squashing a huge 838lb/380kg dead stop deadlift for 3 reps in training.

The first rep went pretty smoothly for wheels. The second was a little harder and then the last rep was a little struggle but he got it up nonetheless.

Here’s what the caption read…

“838lbs/380kg x3 deadstop deadlift PR.
Had to break in my new leather @teampersonalrecord belt with a PR and long over due BELT THROW!“

That’s some impressive lifting from Wheels but nothing too out of the ordinary for the pr king. He even threw his newly broken in lifting belt to assert himself as a pr crusher.

Here’s the recent video where he bled from his head if you were interested. It’s definitely not the first time this has happened. In fact, it has happened several times!

We’ll be sure to provide updates on Larry Wheels’ plans for the near future and where competition is concerned when things are sure to resume as normal.