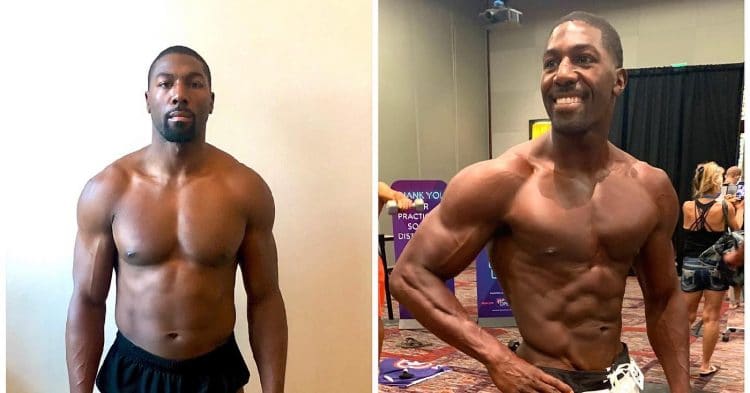 When he announced that he would be giving the sport of bodybuilding a try, there was concern that Greg Jennings may not be able to get the physique he needs to be successful. However some recent updates show that this will not be a problem for the former NFL player.

Jennings spent a decade playing in the NFL, at the highest level of the sport. He even competed as a wide receiver for the Pittsburgh Steelers, aiding them in securing victory at the Super Bowl in 2006. Even after he stopped playing, he still worked successfully as an analyst and commentator for regional games.

This focus of football made it a bit surprising to hear that Greg Jennings was looking to make the jump to bodybuilding. He was already in great shape obviously, but it seemed like a late transition for the 36-year old. As a result there was concern that it may be too late for him to really turn into a successful bodybuilder. However this proved to not be an issue, as he successfully made his bodybuilding debut, winning the Mr. Minnesota contest. He shared a before and after to his Instagram, celebrating the progress he made to get to this point.

“Then vs. Now
:
Before I completely close the door on this my first prep, and competition. I thought it would be only fitting to recap. I don’t celebrate myself that well so don’t expect me to talk about becoming Mr. Minnesota 🤷🏾‍♂️.
:
November 4, 2019 I began this transformation. This health & fitness journey was one I had experience with primarily surrounding the world of sport. Physically I knew I would be up to the challenge. Mentally was where I had my greatest question.
:
Would I be willing to go all in again?
:
Would I push beyond, beyond?
:
Could I revive the disciplines it takes to be great?
:
Initially what I failed to remember was. The answer to all those question are only revealed while exposed to and consumed with the process.
:
See often time we selfishly think our experiences are solely for our own benefit. We couldn’t be more ignorant.
:
This experience was not only to better myself but to also inform me that what worked “back then” may not work “here and now”.
:
I had to surround myself with a new support system. Individuals who knew more than me, individuals that would only take what was needed from “back then” and help me to apply it to “here and now”. Meanwhile, they were being ushered into new territories as well. Areas that would better equip them as we collectively progressed.
:
Finally, this experience was also for you. To show you that you too can accomplish any goal you set. All you/we need is a tinch of inspiration. For me that was @nicole.jennings85 running a marathon.
:
If you haven’t realized it yet let me help you. Our world needs inspiration. It’s the inspiration that sparks the interest that will ultimately be the change we all so desperately need.🙏🏾
:
Remember this! Now will eventually become Then so don’t flatter yourself to long. You have better in you.”

There can be no denying that Jennings has come a long way. This is a clear product of the hard work he has been putting in. Even during the 4th of July he showed disciplined and focus on the goal at hand.

As he explained, Greg Jennings hopes to be able to use his transformation as inspiration to others. It is hard not to be inspired by the things he has been able to accomplish, even with bodybuilding being a second career. We look forward to seeing him in action more often.