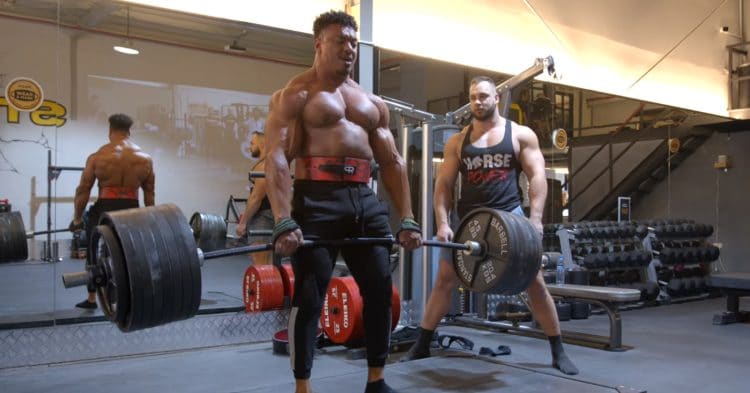 Larry Wheels recently broke his deadlift personal record in the gym. Wheels has collaborated with a large number of celebrities, athletes, and other people from the fitness and sports industry in the past. These collaborative workout videos are probably the second most intriguing aspect of his internet presence after the massive record-breaking lifts.

2021 Czech Strongest Man Jan Krasinsky aka Anabolic Horse recently joined Wheels at the Strong Gym Headquarters in Dubai for a deadlift day. During this session, Larry Wheels broke his previous personal record of 328.8kg (725lbs) deadlifts raw for 12 reps and pumped a massive 337.9kg (745lbs) deadlift for 11 reps. Video of this session was uploaded on Larry Wheels’ YouTube channel.

At the beginning of the video, Larry Wheels stated that the duo last trained together more than two years ago and this collab was a long time coming due to Covid-19 imposed restrictions. After the initial introduction, they both jumped right into the workout and started the deadlift day with a 102.1kg (225lbs) deadlift double.

Larry Wheels and Anabolic Horse go through the deadlift session

Larry Wheels stated that there are not many strongmen or powerlifters around him in Dubai and a healthy competition during a collab helps him push the limits in training.

“Not often do I get to come across essentially another Larry Wheels because there’s not too many going around. But Horse is certainly up there with me as well. Typically bodybuilders are really strong in the machines but don’t push themselves too much on the squat, bench or deadlift – free weights,” Wheels said about Anabolic Horse in the post-workout comments.

Larry Wheels has been open about his use of anabolic substances. He stated that he has recently started using a new substance.

“I’m on something special, something new which I’ll talk about in a future video. If I talk about it now, most of you watching will probably want to give it a try. That’s not what I’m about,” Wheels said.

To conclude the video, Larry Wheels stated that arm wrestling and scoring wins over professional arm wrestlers is his primary focus for now.

“But I still love powerlifting and bodybuilding training and I’m never going to give that up. Maybe I’m not as eager or motivated to compete in either sports – strongman or powerlifting at the moment. But that will change in time,” Wheels said.

Courtesy of Larry Wheels YouTube channel, you can watch the full video here: