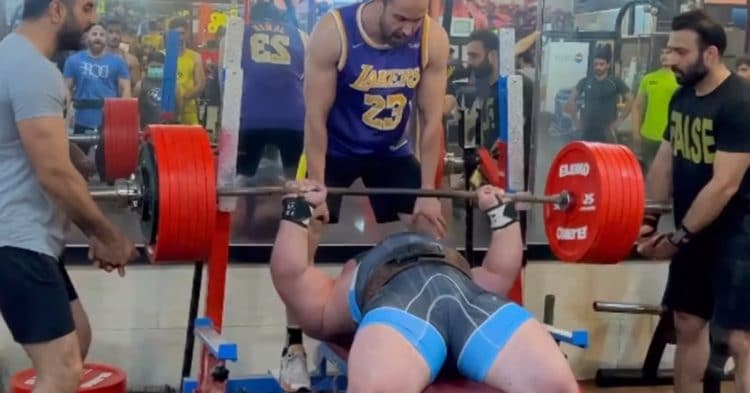 For some time now, Iranian powerlifter Danial Zamani has been interested in breaking the raw bench press World Record. Zamani has been taking things steadily in the gym, progressing but not risking an injury. The slow approach and progressive overload have paid off, as he just trounced a 350 kg (771.6 lbs) raw bench press, and shared it on his Instagram.

In a video, Zamani was seen only wearing a lifting belt and wrist wraps, making this lift raw.

Danial Zamani’s lift is not far off the current World Record, which is held by Julius Maddox. The record stands at 355 kg (782 lbs), but Zamani won’t stop there. In the caption of his video, Zamani said that in 15 days he will attempt a bench press of 800 lbs (362.9 kg).

Many people were shocked by Danial Zamani’s press, and some of them left comments to express their feelings. This includes a few of the world’s greatest and strongest athletes.

Julius Maddox – The most notable comment was from Julius, the current Bench Press World Record holder. His record could fall soon, but Julius is showing some real fair play, and giving praise where it is due.

Zamani replied to Julius and expressed his appreciation for the comment.

“You are my big brother,” replied Zamani.

Larry Wheels – probably the strongest Pound-For-Pound man in the world, known for his insane lifts. Larry believes Zamani will break the record.

“The throne is at risk! Congrats Boss!” wrote Larry.

Many more praises were left in the comments from people like C.T. Fletcher, Milos Sarcev, Ivan Makarov, and more.

At 30-years-old, Danial Zamani has been chasing the bench press World Record for a while. He’s been lifting massive weights for a while, but it was his 325 kg (716.5 lbs) bench press in March 2021 that truly placed him on the map. Danial has been making incredible improvements since then. The strongest bench presser in the world locked out 352.5 kg (777 lbs) in training on August 16th, 2021, and expressed interest in smashing the world record.

Julius Maddox is the current raw bench press world record holder with a 355 kg (782.6 lbs) lift, scored at the 2021 World Raw Powerlifting Federation (WRPF) Hybrid Showdown III in Miami, Florida. Julius set his sights on 800 lbs (362.9 kg) for a very long time. He has already attempted the lift at the World’s Ultimate Strongman (WUS) “Feats of Strength” series “Beasts of the Bench” sanctioned by the (USPA), but a weight misload caused him to tear a pec.

Danial Zamani continues to impress in the training room, and considering the speed at which he pressed 350 kg (771.6 lbs), the World Record is bound to fall. The only question is if Zamani will lift 800 lbs (362.9 kg), as he announced.