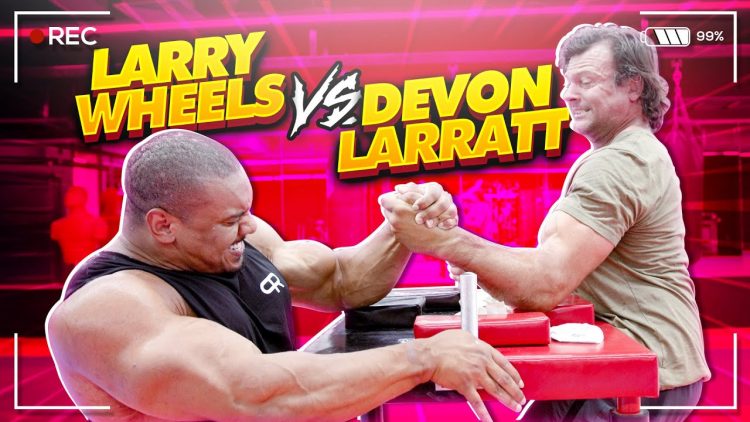 Larry Wheels isn’t a normal human. He is like that one kid in the toy store that is told can have only one toy but he insists on having two. He starts training bodybuilding but quickly switches to powerlifting. He sees that Strongman seems like a cool thing he can try on so he starts training for Strongman. He starts reading about strict curl world records so he decides to switch gears a bit and do strict curls for a while. Now, he has found a new shiny toy in Arm wrestling! So in order to prepare for his showdowns with School Boy and Jujimufu, he enlisted some help from one of the best arm wrestlers ever-Devon Larratt. Devon wields the magical powers of 80’s mullet and has been beating top guys on a regular basis for quite a while now.

Joking aside, Devon is one hell of an arm wrestler and has been arm-wrestling guys that look like James Bond villain’s henchmen for the good part of the past decade. He is a veteran of the sport and if anyone has ever seen his videos knows that Devon is a master technician above all else. He has feints, tricks, angles, hand positioning, strap/ni strap, timings, the famous “dad move”….the man is truly a master.

Larry, on the other hand, is a giant sponge when it comes to anything strength related. He just absorbs information and isn’t afraid of being humble during the learning process. Basically this was a merger of a perfect student and perfect teacher. Larry was willing to absorb as much information as Devon was willing to dish out.

Devon shared so many little tips and tricks that I don’t even start with naming them, so I suggest sparing 40 minutes from your day and watch the master talk technicality behind the sport most people still only know through that awesome Stallone movie from the 80’s.