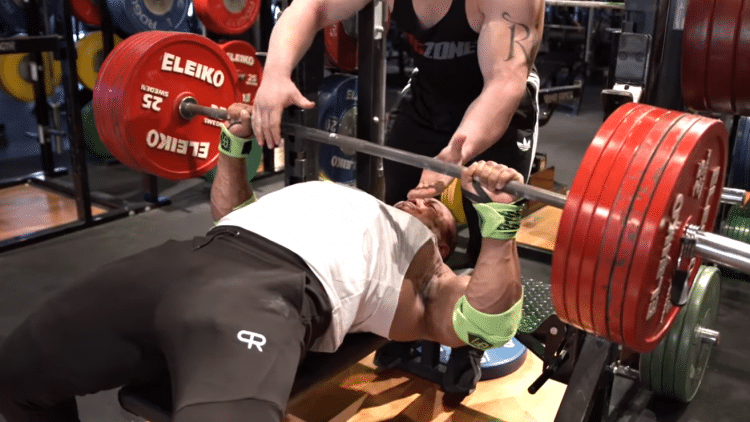 Larry Wheels is known to try to push himself beyond his limitations. This almost cost him big time, when he attempted a massive 705lb bench press.

Wheels was looking to compete at an upcoming powerlifting meet. Additionally, while there, he was attempting to make further progress on his goal to achieve the all-time bench press record, held by Julius Maddox. As a result, he has been working as hard as he can, trying to reach the next step in the journey to that goal.

That next step came in the form of a 705lb bench press. This is an amount that elite powerlifters look to as a massive benchmark to success. Therefore, Wheels wanted to accomplish this feat. Unfortunately, things would not go as planned, for the almost 25 year old.

In a video, uploaded to YouTube, you can see Larry Wheels attempt this 705lb bench. Despite the massive weight, he would only have one spotter when he gave it a try. Subsequently, he would fail the lift, with the bar going back down at the midway point. While the spotter would try to help him, the weight was too heavy. Therefore, the pair would be left to pin it against the rack, until others came, and Wheels was able to get out from under it.

Following the mishap, Wheels was critical of his decision to go for the lift.

“Definitely wasn’t the right thing to do because now I don’t know what’s wrong with it. I’ll get it checked out. I think it’s my body telling me I’m pushing too hard too soon and also I’m already peaked so it’s a discipline issue. The discipline being that I should have stopped at 270 (kilograms/595 pounds) and waited until the competition.”

Additionally, Wheels explained that he thinks he got injured, resulting in him needing to withdraw from competition. While he had previously suffered a minor ankle injury, this was believed to be more severe.

“My meet was supposed to be in two weeks but, I mean, the ankle was very minor but this feels like it could be serious. Injuries are part of the game. As we get older we get more disciplined, wiser, smarter, and we mature at different rates.”

Nevertheless, a few days later Wheels would post an update to his Instagram. In the post, he uploaded a video of a 600lb bench, seemingly from the same session as before. However, he explains that the injury was not as bad as he thought, and he should be good to go for the meet.

“600 for a single! Competing at RPS insurrection 23/24 . @teampersonalrecord @leonidas_arkona
Yes my shoulder is good! FULL day of eating video now live on YouTube!”

It is good to see that Larry Wheels was able to escape relatively unharmed. This was a dangerous move by him, and he was lucky to only get minor injuries. It would be a shame to see a powerlifting phenom like he is, be wasted with preventable injuries.