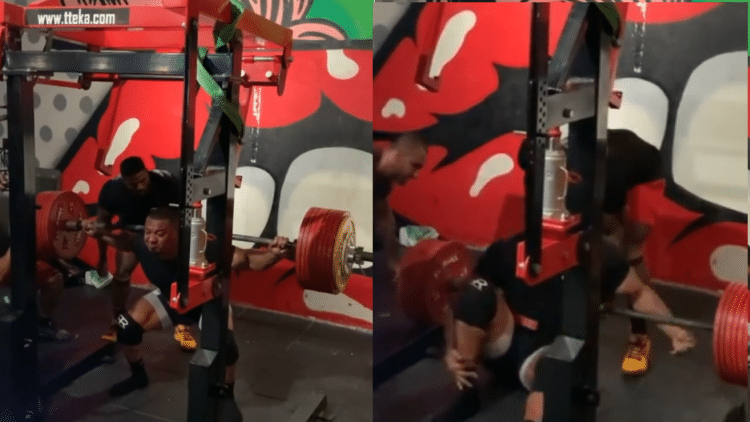 Larry Wheels is always trying to push himself to the utter limits. However, this may be his downfall, as he seems to have hurt himself doing a squat.

Wheels is known as the personal record wrecking machine, always looking to improve his scores. It seems like most times he is in the gym, he is trying to crush some sort of PR. Furthermore, in most situations, he is usually able to do just that.

However, Wheels recently suffered an injury, which set him back a bit. He had torn the bicep in his left arm. As a result, he was unable to train with it for a few months. Although this did not stop him for still doing some crazy things in the weight room.

Despite the injury, Larry Wheels was fully healed, and back to regular training. This means that he is back to trying to break his own records. Unfortunately, this time that seems to have backfired, as he showed on Instagram. In the video, he is trying to do an impossibly heavy squat. However, he is unable to complete it, ultimately needing help from his spotters.

In the footage, Wheels clearly does something to his right ankle, hurting it in some form. He said in the post, that he popped it. Therefore, one can only hope that he has not injured himself too badly. A dislocated ankle is not something that is fun, he will certainly be feeling it for a few days. On the other hand, it definitely beats having something more serious, keeping him sidelined again.

Hopefully Larry Wheels is not too hurt from this failed lift. With him being such a promising athlete, it would a shame if he had to spend more time injured. Either way, perhaps he can give this lift another try soon.