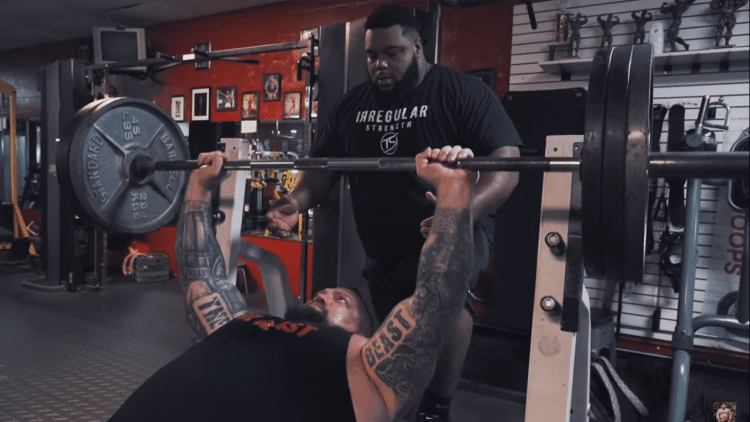 Julius Maddox and Eddie Hall are two of the strongest men in the world. They recently competed to see who could do the most reps of a 315lb incline bench press.

Maddox and Hall have both been established as two of most powerful athletes on the planet. When it comes to powerlifting, Julius has no equal. He holds the record for the all-time heaviest bench press. Additionally, he has won every single contest he has competed in, since 2015.

On the other hand, Eddie Hall is impressive in his own right. Similar to Maddox, he too holds a world record. Although his is for the heaviest deadlift, at a whopping 500kg! In addition to that, he has also won many strongman contests, including at the 2017 World’s Strongest Man.

As a result, when it was revealed that these two behemoths were training together, fans were intrigued. In a video, uploaded to Eddie Hall’s YouTube, he and Julius Maddox hit the weights for a day of hard work. However, training was not all that these two did. At around 15:30 of the video, the pair went toe to toe, to see who could do the most reps of a 315lb bench press.

When the two faced off, they actually did pretty similar amounts of reps. Nevertheless, it would be Maddox who would win in the end. He managed to hit 22 reps, beating Hall’s 19 reps by just three. This result does not come as a surprise, considering the bench press is Maddox’s strong suit. Although it was still entertaining to watch all the same.

Another interesting thing to note from this video, is that Julius Maddox expressed interest in strongman competition. He certainly has the physique for it. Moreover, if he were to work with Eddie Hall, it seems like a certainty that he would be successful in those endeavors. Time will tell what he chooses to do.

Kristy Hawkins, Brianny Terry Have Epic Back And Forth For New Deadlift Record