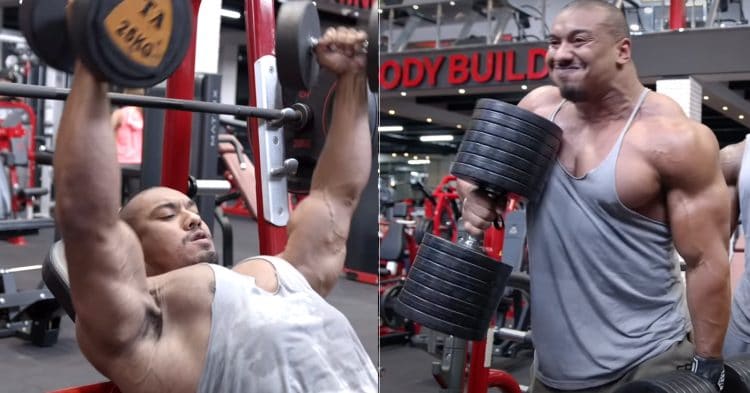 Larry Wheels has been very active on his youtube channel, sharing a wide variety of content with fans from arm wrestling, to challenges, to hitting new PRs, and even talking about his struggles with addiction. Wheels recently announced that he’ll be focusing on Strongman and even hit a new deadlift PR of 937lbs!

Related: Larry Wheels Opens Up About Overcoming His Battle With Addiction

And in his most recent upload, Wheels said that he’s trying to get shredded and improve his conditioning with cardio 5 times per week. But because he’s relatively new to incorporating cardio in his training, especially before a workout, his less than optimal conditioning definitely zapped his energy a little in a recent session.

Wheels has been looking pretty massive lately, even focusing on hypertrophy training which he noted a few weeks back. But if he’s going to training for Strongman, then being out of shape won’t help him perform with the best.

They started off with a machine chest fly/ rear delt fly superset. Then they moved on to the incline Spoto press superset w/ incline dumbbell flys. The Spoto press is a bench press variation that involves lowering the bar to a few inches from the chest and holding briefly. Its purpose is to increase strength in this position which carries over into the full bench press.

Wheels started with 2 plates (each side) on the bench and then added another plate for the next few sets. For the flys, he used the 30kg/66lb dumbbells. Andrew also used this weight and it’s safe to say this was a tough workout for the both of them.

During the session, Wheels explained that because he hasn’t pressed in a few months with the lockdown, his stability is a little off. He definitely was at his strongest here but he pushed through nonetheless.

So next they did pushups with feet elevated on a bench while holding two dumbbells together on the floor. Wheels admitted that he gassed out pretty quickly with these, only being able to hit eight reps. “Gassed out, hit a wall. I thought I had ten more and then did one rep and gassed out.”

Several months month, Andrew Jacked set the bar by doing 63.5kg/140lb dumbbell hammer curls for 10 reps. Larry Wheels didn’t give it a go that time though as he had torn his bicep not long before that. Although the two have been known to have their arm strength battles.

But this time they went head-to-head in the 140lb hammer curl. Wheels’ started off first and was able to complete 10 reps. But Andrew was able to finish with 11 reps which gave him the win. That’s a ton of weight to curl but if anyone can do it, it’s these two behemoths.

The next exercise was standing calf raises. Larry Wheels has often been teased for having smaller calves but he has been working them pretty hard of which he’s definitely seen some improvements.

He then hopped over to the hack squat machine and finished off with more calf raises.

Wrapping Up and More

After the session, Wheels explained that because he started with cardio, he depleted his energy stores rather quickly especially when it came time for weight training. His strategy for the next workout is to take some ECAs if we heard correctly since water alone wasn’t enough as he mentioned.

He also said that he doesn’t want to take a pre-workout for the next session either due to the high caffeine of which he’s very intolerant of, as it makes him anxious, jittery, and affects his sleep. He’ll only use pre-workouts if he has a big PR or something similar.

Wheels’ acknowledged that during the session, he kept hitting walls sooner than expected which you probably noticed. He noted that his carbs are very low (about 400g less) compared to what they were when he recently hit the deadlift PR. Carbs are very important for providing us with lots of energy during physical activity.

But because he’s trying to get shredded, reducing his carbs will definitely help him to get there faster.

He mentioned that when cutting, you can have more protein which actually reduces the overall caloric intake compared to if you were to eat more carbs. Reducing calories is important for losing body fat.

But both Larry Wheels and Andrew Jacked are just trying to get ripped right now for the summer while the latter wants to gain an extra 20 pounds of muscle in the winter which would definitely be a sight to see as Wheels explained seeing as he’s already very massive.

And… we can’t forget that Larry Wheels recently did a strict curl of 90kg/198 pounds. This was apparently, only roughly 50 pounds shy of the current strict curl record of 113KG/249lbs held by Dennis Cyplenkov. Well, he’s looking to break this record and it’ll be really interesting to see if he can especially since this was his first time doing the lift.

Watch the full workout session below…