Larry Wheels makes a response video to address the accusation that he lied about a strength feat. 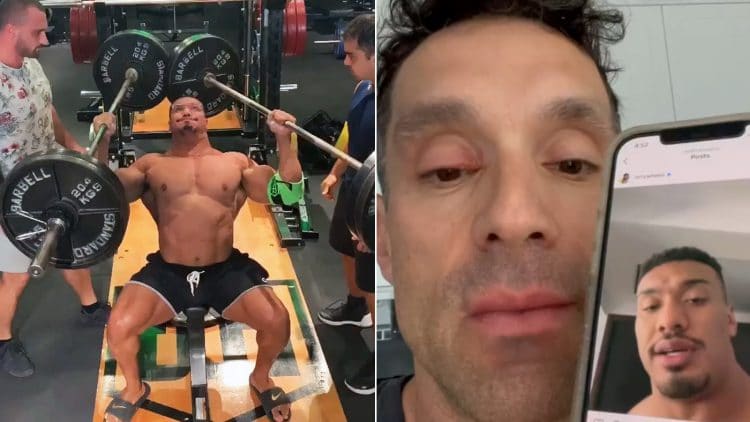 Fitness YouTuber and IFBB Pro bodybuilder Greg Doucette called out powerlifting phenom Larry Wheels for “deceiving the public” after shoulder pressing two loaded barbells in each hand back in 2019.

Doucette says the weight was not mentioned anywhere, but rather, Wheels’ made it seem he was pressing four 45 plates on each side and therefore called it fake weights.

Well, the latter has responded via Instagram and is not happy about the accusations.

Here’s what Wheels’ had to say…

In the clip below, Wheels’ explained that he used a 20kg iron weight plate and 25 lb rubber bumper plate and that the weight was, indeed, 185 lbs in each hand.

He encouraged watching the full video titled “Craziest shoulder press you’ve ever seen,” to see his full warmup and all the plates he used for that lift.

He ended with, “I’ve never used fake weights, and never will”.

Below is a post from Greg Doucette of which others chimed in.

But then Doucette posted to Instagram even more recently with a detailed message and video in response to Larry Wheels’ post.

“Be ready for me Jen my YouTube video comes out as it’s 100% undeniable that’s you on purpose chose to deceive the viewers into thinking u were pressing 225 in each hand. I specifically said in my video that you could not do 225 in each hand and therefore it had to be fake Waze last I checked 185 is a heck of a lot lighter than 225 and his fake.

No one said you weren’t strong I just simply said you’re not strong enough to do 225 for 5. And that post lead to other people re-sharing that post even powerlifting websites making it look like you were pressing to place a side which perpetuates the myth that humans are somehow lifting these incredible weights.

It’s deceiving and it’s fake. Of course you don’t like being called out and proven that you’re deceiving the public but it’s not the first time you’ve lied which I also showing this video just so that people see your history.

The smarter play would’ve been to say I forgot to put that it was 185 in the post I put on Instagram not to later add that it’s 185 after the fact and then when you get called out on it you remove the fact that it says 185 because it’s highly suspect to go in and edit the title to make it look like you would actually been in the right the entire time when you weren’t.”

Doucette’s issue, according to this post, is that he believes Wheels’ was trying to deceive everyone by not saying the weight was 185 lbs until after the fact, and rather making people believe he was shoulder pressing 225 barbells in each hand.

So now he has a video response coming out and it’ll be interesting to hear what he has to say.

Greg Doucette is known for calling out many fitness influencers on YouTube and in fact, he doesn’t seem too afraid to call out or criticize anyone.

If you’d like the watch the full shoulder strength feat video then you can below.